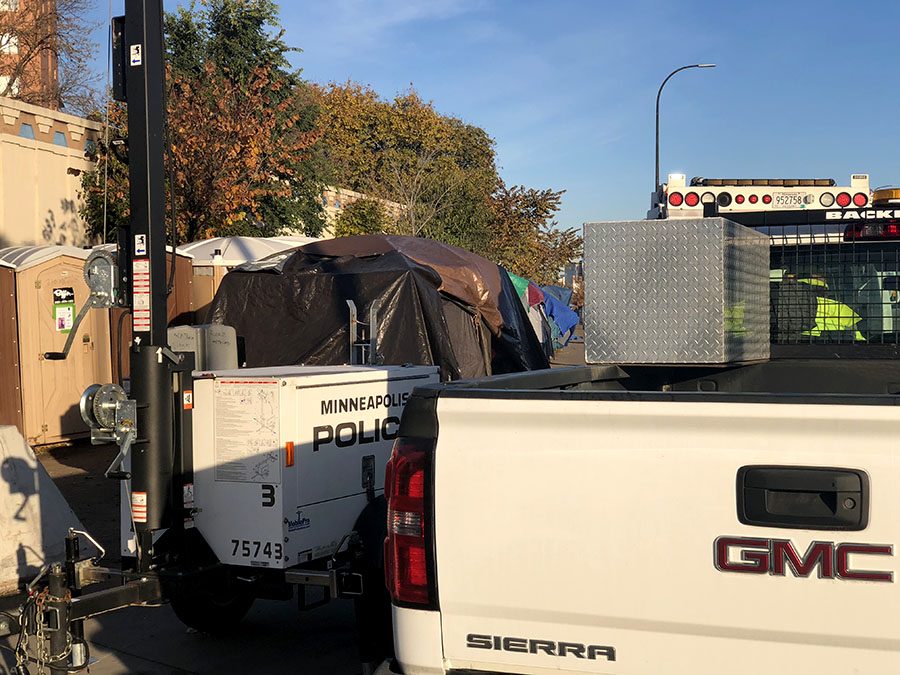 In the camp, residents are living in very tight, close quarters. Conditions have gotten better from what it used to be, after the involvement of outside organizations increased. “There’s a lot of food, a lot of blankets, a lot of donations coming in from churches, organizations and individuals,” said volunteer James Cross. Minneapolis police have consistently been present at the site as well.

Along the walls near Highway 55 and Hiawatha, close to the Little Earth Housing Complex, a large camp of tents occupied by homeless individuals and families has been growing.

The camp started in May with one tent and has since grown to roughly 170 tents housing up to 400 people, according to James Cross, an active member in an organization called Natives Against Heroine, which has been heavily active at the camp.

“This isn’t the first time people have camped in that specific spot, or anywhere along highway 55 or Hiawatha along those walls,” All Nations social studies teacher Vince Patton pointed out. “Every spring there’s one or two tents or people living there. But for some reason specifically this year, that camp grew and people started going there more and more.”

Because of the size and visibility of the large camp, public attention has caught on quickly. A visual that represents the sometimes misunderstood homeless demographic of Minneapolis is being perceived by many as a positive thing because of the now deeper understanding and concern being ingrained into the community. “I do think that having it be a really obvious visual thing that people have to look at makes people really uncomfortable, but it also galvanized people to be like ‘Oh wow, this is actually happening. This is in our city,’” said South social worker Katie Fritz.

In the camp, residents are living in very tight, close quarters. Conditions have gotten better from what it used to be, after the involvement of outside organizations increased. “There’s a lot of food, a lot of blankets, a lot of donations coming in from churches, organizations and individuals,” said Cross.

However, Patton, who has connections to people currently living in the camp confirmed that “the overcrowding of people is still a big problem.”

The risk of communicable diseases is another large issue in such communities because there’s not constant attention to cleanliness. Transmissible diseases as simple as a cold can easily spread in such a cramped area, but there are also more drastic risks present: the sharing of needles can be a very dangerous and is certainly present within the camp where drugs are prominent. One death at the camp was confirmed as an overdose.

A stand out aspect of the camp, and homelessness in general, is the disproportionate number of Native people in comparison to other demographics. Patton explained some of the likely causes of this statistic: “if we go back to the Indian relocation program, they moved a lot of Native Americans to the Minneapolis area in the 50’s,” Patton said. During that time period, natives were moved into the Cedar-Riverside apartments.

The effects of the drastic displacement of Native communities that have taken place in the country are still very prominent within Native culture. “The largest reason why Native American poverty is high is because the traditional economic ways were taken from them… their [economic] ways that they knew how to do weren’t going to transfer into downtown Minneapolis area,” Patton said.

“Their economy was based on trading and goods and bartering. There wasn’t as much ‘money’ involved, or this idea of home ownership,” Patton elaborated.

Fritz also pointed out that throughout Minneapolis “there is generally kind of a bump in rental costs and so certainly it’s harder to find or maintain housing,” an explanation for general homelessness increases.

“What we need to look at is how to definitely get affordable housing,” agreed Cross.

Many nonprofits and organizations have contributed to the camp and attempted to benefit the quality of life the residents have. Groups such as Natives Against Heroine (NAH), St. Stephen’s Human Services, Hennepin County Health Care for the Homeless, and the American Indian Community Development Corporation.

Those groups have done things like provide emergency aid kits, blankets, and so forth.

Natives Against Heroine (NAH) is a group dedicated to attacking the drug/heroin epidemic among native communities, and has brought sterile needles and emergency overdose kits to the camp.

According to Patton, this is a mixed bag in terms of the effectiveness. “It’s great because they’re not spreading the diseases-that’s huge-but at the same time it opens up a can of worms that I have seen and I have known. It becomes a one stop shop for a drug dealer to walk down that lane with his bag of heroin, and sell everything that he has by the end of the block,” he said.

On September 26th, a resolution was made so that the moving of the camp residents could commence. It was decided that Red Lake Nation will be purchasing the land and the buildings across from Highway 55 in order to temporarily house some of the homeless population.

The proposal is for the buildings to be used as transitional housing. “That should be a very positive thing and a step in the right direction,” said Cross. This relocation has not yet started, but organizers plan to have residents moved by early December.

However, it is important to note that this is not a permanent fix for the homeless epidemic in Minneapolis. “Think of it like a gunshot wound; the first thing they’ve got to do is stop the bleeding, so right now that’s what they’re doing with the porta potties, lights, garbage cans,” said Patton. “Hell, even the land that they purchase is only going to stop the bleeding.”

“Really, they’ve got to go in there and do surgery on this whole system to get that bullet lodged out. That’s going to be a hard thing.” According to Patton, under a capitalist society it is systematically impossible to eliminate the lower class.

In order for deep changes to happen, as Patton suggests, it is important for public attention to stay strong. “It feels like there’s a lot of energy around providing resources and people financially supporting folks. I would love to think that there will be continued attention,” said Fritz, who is hopeful but admittedly concerned that the city and the public will not hold onto this important issue as it leaves visibility.