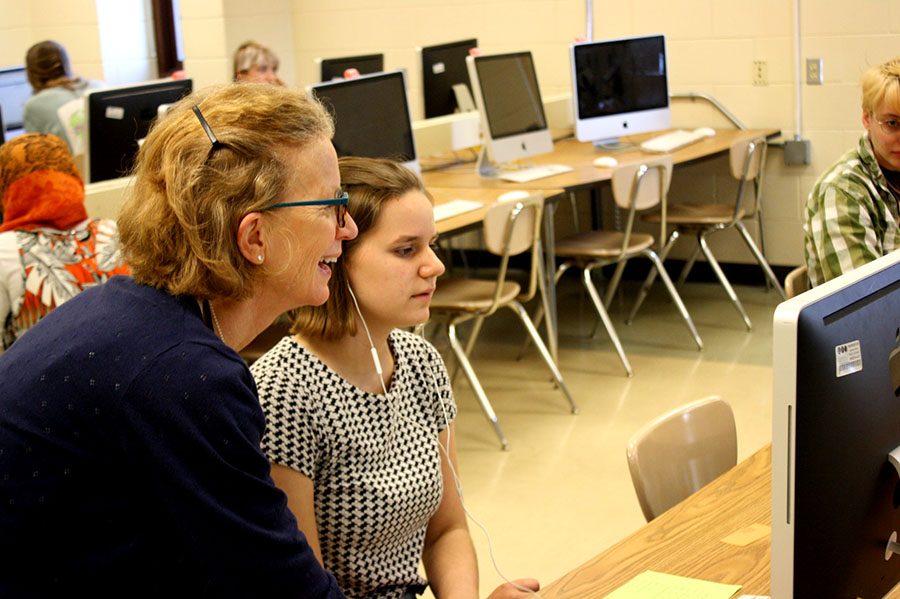 French teacher Melissa Davis helps sophomore Gillian Rath with a computer test. “I have a hard time leaving because teaching has been my life... but I’m also excited to go on and do other things too,” Davis explained. Photo: Izzy Willette

This year there are several staff members who will be leaving South. Of the 19 positions that were initially going to be cut at South, some of the teachers cut were able to stay because of money restored to the MPS district’s budget. However, some cuts are still in store, and therefore staff members who were planning on retiring, like French teacher Melissa Davis, are still going to do so.

Davis, who has taught at South for 21 years, will be retiring this year. She is retiring slightly earlier than planned because of the budget cuts and retirement incentive. “I have a hard time leaving because teaching has been my life for the past 21 years, but I’m also excited to go on and do other things too,” said Davis.

Davis is a part-time Pilates Instructor at the moment, and plans to do more of this after her retirement. She is excited to relax more. “Sometimes I think that it’s gonna feel nice to not feel tired all the time,” Davis said.

John Rozeboom, a science teacher who has worked at South for 34 years, is also retiring. “I’ve seen a lot of changes, the third floor being one of them… There are a lot of younger teachers that are just starting and have young families and it’s time for them to take over,” said Rozeboom.

Rozeboom likes seeing his old students outside of school. “It’s starting to get to the point when I teach students whose parents I taught, and that’s kinda weird but it’s fun at the same time,” Rozeboom said.

Anne Marie Plante is another staff member retiring from South this year. She wanted to let everyone know that she is grateful for both the staff and students who were around to help her grow as a person and as a professional.

Laura Lanik, a Social Studies teacher who has taught at South for 22 years, doesn’t want to leave for a while. But since it’s not too far away either, she has thought about what would happen.

Holiday Samabaly, an English teacher, is leaving South after teaching for two years. “The minute I found out I wasn’t gonna have a job at South, I was sad for a couple days and then I just hit the ground running because I had to find something [new],” said Samabaly, who will switch to Hopkins high school next year.

At first Samabaly was having a difficult time, but support from the South community helped. “Everybody was really worried about me, my well being, and what was gonna happen… I know I’m leaving a very special place. That’s really hard to do but I also know they’re a text away,” Samabaly explained.

“Outside of school I’ll see former student and they say like how much they liked being in French with me and they have good memories… I [love] just knowing that I can have a positive influence on kids’ lives,” said Davis.

Each of the staff members that are leaving South this year or sometime in the future will remember and hopefully cherish the experiences they have had in the South community.