College is a complex journey for undocumented students 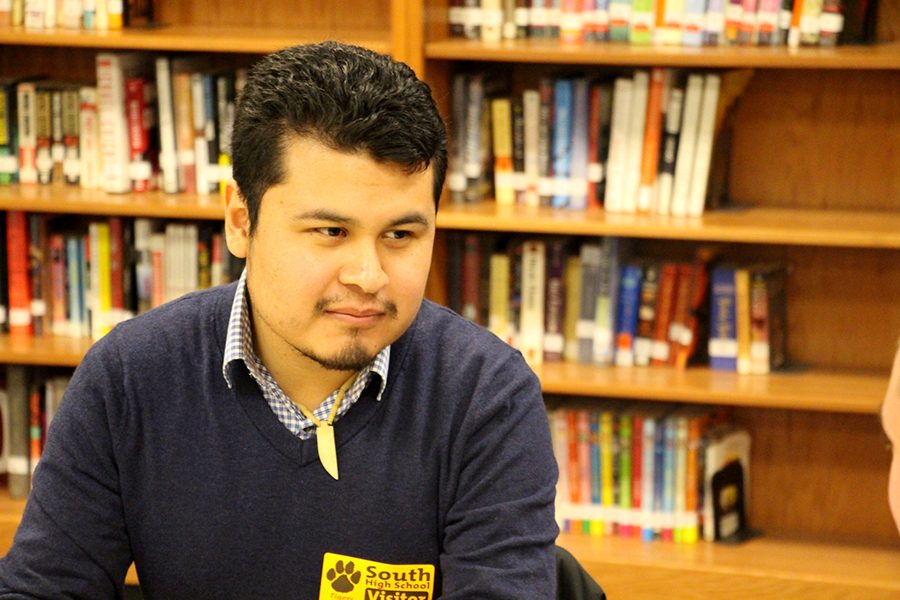 Jose Alvillar, the Educational Justice Organizer for local non-profit Navigate Minnesota, recently gave a presentation to South staff and students on the financial opportunities for students who are undocumented or have DACA. Alvillar stresses that students should reach out to other people and organizations. “Having that support system, having others who have similar lived experiences, always kind of uplifts you and makes you know that things will be better one day.” Photo: Eli Shimanski

“To change the world. To change the world in my own perspective, even if it’s just in my own mind, and changing myself and becoming a mature adult,” is Junior Ana Maldonado’s reason for going to college, translated through Bilingual Associate Educator Heather Hindrichsen. Maldonado immigrated to Minnesota over two years ago from Mexico. Maldonado is interested in going to college, but as someone who came undocumented, and now has a visa, it’s a complicated process.

The combination of college applications, scholarships, and financial aid forms is overwhelming for the average student but for students who are undocumented there are whole different set of unique challenges, some as simple as writing your name. “There is some fear out there for applying for things, about putting your name down on a piece of paper that your sending to the government,” explained Hindrichsen. “People that don’t have…legal status or their parents don’t, they don’t want to call attention to themselves.”

Another main barrier is access to financial aid. A student that is either undocumented or has  DACA (Deferred Action for Childhood Arrivals) does not qualify for federal financial aid such as the FAFSA. Undocumented students have to rely on resources like scholarships more than the average student and all of this takes extra work.

“If you’re an undocumented students you’re going to have to plan more than a normal student,” said College and Career Coordinator Katherine Hanson. “Get all your forms, get all your ducks in a rows, and do all of the extra steps.

For Maldonado it is simple. “Language…it’s the most important [barrier].” To be able to go to an American college, it is a necessity to be able to speak English, and for many immigrants that is the first step.

However, there are options for undocumented students who want to go to college. Jose Alvillar, Education Justice Organizer for non-profit Navigate Minnesota, recently gave a presentation at South High about financial resources for undocumented students. Senior Deisy Castro was at this meeting as a representative and vice president from the Latinx student group UNIDOS. Castro described UNIDOS as representing the “Latino community as well as trying our best to help others.”

Although she was born in the U.S., Castro wants Unidos to be able to help students that are undocumented and need information. “It would be better for us to know a little bit about it in order to help them,” said Castro.

Alvillar currently is part of the DACA program but understands undocumented students experiences because he himself was one while he attended Roosevelt High School. In high school he had to focus on scholarships while his peers worked on the FAFSA. “I always felt like I was the only one going through this process and everyone else was doing something else,” said Alvillar. “Often you feel like you are alone in this world, doing this and that you are the only one undocumented.”

However, Alvillar stresses that this is not the case. “What I tell my students is to just reach out to other people. Reach out to organizations because we are not alone. There are a lot of people going through this,” said Alvillar. “Having that support system, having others who have similar lived experience, always kind of uplifts you and makes you know that things will be better one day.”

While being very self-motivated, Alvillar also had support from his family. “I was raised in a family that always pushed me to do my best,” said Avilar. He recalls his parents saying to him, “‘I know things are rough and they are not going to get any easier but if you pursue this one day things might change.’”

Throughout these challenges, Alvillar’s community has helped him to continue on. “Things have never really been easy and I don’t think they will be unless we systemically change them,” said Alvillar. “What has kept me going is knowing that things have not been easy and that somehow as a community, as a people, we have still moved forward.”

Maldonado credits her self motivation to her drive to prove others wrong, “I’ve seen a lot of other people struggle….seeing that happen and coming from Mexico where people told me I couldn’t do it because I’m a woman, because it’s very machista. [male chauvinistic],” They say you just have to put your head down,” she explained.

Maldonado isn’t the only one in her community who wants to go to college, but many people around her have struggled. “Most of my friends…are thinking about that they want to go college but they have families that don’t necessarily support them and don’t push them and encourage them,” said Maldonado. “Some of my friends are even leaving high school…because they don’t have that support.”

Luckily, South has many resources for supporting students of different citizenship statuses going to college.

“Come meet with us,” is Hanson’s first piece of advice for  undocumented students thinking about college. The College and Career Center or CCC can be huge resource inside South to find information about any type of post-secondary option. “We consider ourselves the experts…we live and breath this,” said College and Career Coordinator Nneka Abdullah.

By visiting the CCC, students can find information out what financial aid they might be eligible for and what scholarships are available. Some, such as the Latino Economic Development Center’s college scholarship are for any Latinx student but priority is given to undocumented students. These can be used at any college. Other colleges have specific scholarships for undocumented students but they can only be applied at that college.

“A lot of the conversation before Dream Act ever passed was, ‘Why are undocumented students who reside in Minnesota who graduated from a…high school in Minnesota who have been here…ever since they were kids have to pay out of state tuition?” explained Alvillar.

After all the barriers, why is it worth it go to college? The reasons are as varied for an undocumented student as any other. According to Bilingual associate educator Tracy Bernabe going to college is why the some students immigrated to the U.S. in the first place,”it’s [the parents] dream for [the students], go to college…get a job you actually like, make good money to have a better life for yourself and even help the family.”

Castro, explained that she wants to go to college in order to support her parents. “We want to be someone in life, we see our parents struggle, we just want to something better, to help them.”

The future is uncertain for many immigrant students, especially those who are undocumented. However, as Maldonado plans a possible future as a psychologist, she has one main piece of advice for undocumented students thinking about their future as well. “Believe in yourself, that’s one of the most important things.”