State of music diversity is on a low note 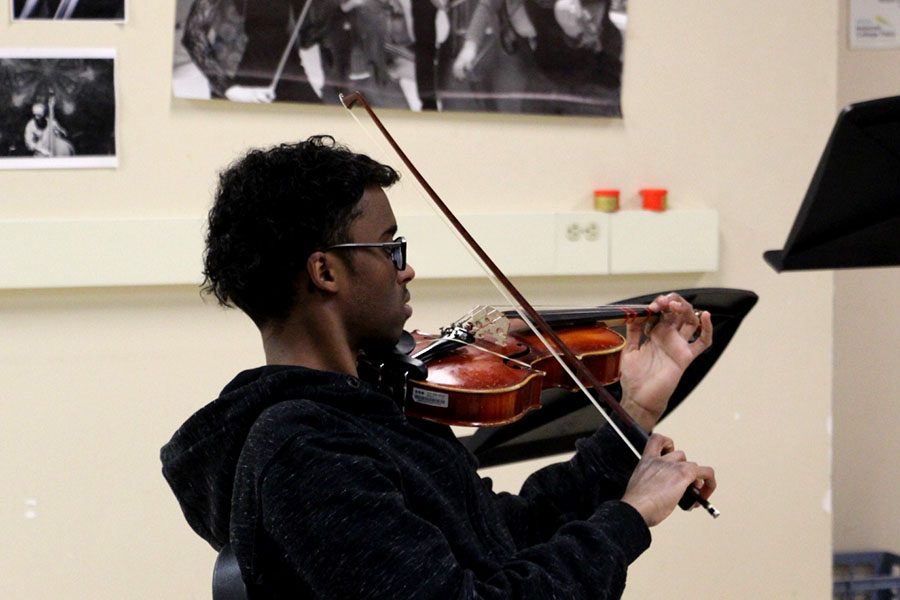 Senior Abdirahman Katun plays the viola in Beginning Strings. One of a few entry level music classes, Beginning Strings allows students who have never played before to learn a string instrument. “We’re lucky here at South because our administration has put stringed instruments into the hands of the students who want to learn them, they put the money out for it and so this is why we can do it,” said Lorie Hippen, the South orchestra instructor.

The diversity in South High seems similar. Junior Jewel Ferguson, a trumpet player in Wind Ensemble and Jazz Band one has said that the music ensembles at South are “predominantly white.”

“Minneapolis is pretty segregated and South Minneapolis is predominantly more white people…but also I think that where people went to middle school [matters.] If they had opportunity to start…because its really hard to start Concert Band and just pick up an instrument freshman year,” said Ferguson while explaining the reasons why music ensembles can seem so hard to reach.

However, the beginning levels of music at South are more diverse, “we do have beginning ensembles so south is very good with having opportunities for everyone,” said junior Anya Naylor, an Alto One in Pop Singers and Varsity Choir. The fact that there are beginning levels available for students who have never played an instrument before or are not comfortable with it yet allows more students to join music ensembles. “The String Orchestra is more diverse and more closely represents the student body at South because there’s the existence of Beginning Strings so I can teach students how to play from the very beginning,” said Lorie Hippen, the orchestra instructor for South.

“I think that choir has more entrance points for students with different ability levels, mentally, physically, cognitively, [with] language,” said Laurie Meyers, the choir instructor here at South. “Choir has a little bit more of a gate entry in that if you can match pitch and you’ve got a good ear you can advance much more quickly, that’s just kind of the way it is,” she continued.

Meyers said choir can be a more reachable group to join simply because you do not have to learn or rent an instrument, you are just using your voice. “The difference [between instrumental and vocal groups] is that there are more physical elements to playing an instrument, you use more of your body… as a singer you have your voice as your instrument. There’s a great deal of difference,” said Hippen.

“I think that students are exposed to vocal music with family, community, church at a very young age, and the same exposure [for instrumental music] does not exist because it’s not allowed to exist in our part of the district. It just doesn’t happen and there’s a general lack of understanding of what instrumental music is…there’s a cash outlay to putting instruments into the hands of children and with vocal music you don’t have the instruments to buy… that’s a dollar and cents issue and you have to commit to that for children,” said Hippen.

“[Orchestra is] probably the least diverse of all the music programs…no one is getting exposure to playing instruments anymore, especially string instruments,” said junior Leah Vanek, a violin player in Chamber Orchestra. While a few MPS middle schools and elementary schools offer band and choir programs, only Folwell School offers orchestra.

While entry level ensembles seem to represent South’s demographic more faithfully, music teachers believe that the higher levels of music are less likely to. “This is something we’ve talked about in the music department, the auditioned ensembles vs. the non auditioned ensembles or the beginning and intermediate groups v. the more advanced groups. That’s where I see the [dividing line], not so much across band, orchestra, choir, but across those levels that you have to have achieved a certain proficiency to get to that may be where [the demographic is] not quite like the school,” said Meyers.

Vanek also believes that higher music groups can seem unreachable, “with the top [ensembles] like Wind Ensemble or Chamber… it all depends on how long you’ve been playing and some people just don’t have enough time to grow to the skill that is necessary.”

Joining an ensemble you’ve never been in before can be a barrier. “I think it’s kind of scary to just insert yourself into a community…it still like might hold people back, if they didn’t have the opportunities when they were younger, or their parents couldn’t pay for private lessons,” said Ferguson. However Meyers offers a solution to those nervous to go alone, “you’re not going to sign up for [a new music class] by yourself typically but if you’re friend says ‘lets do this together’… you’ll know you’ll have that class together.”

In the music department staff often talk of starting students out earlier, “those are the things we talk about as a department often. How do we make sure that the invitation is out there for the whole school no matter what you look like [or] during concerts they see themselves reflected up there? How do we empower our middle schools and elementary schools that may or may not have any music to be talking to their kids about it. At South if you want to be in music there’s an entry point,” said Meyers

As a band student starting out in fifth grade at FAIR school, I knew that I was going to enjoy it. It was never a question if I was going to do music, it was which music program would I do. At that point I didn’t realize how easy it was for me to join: my school offered a band program that also had sectional lessons weekly, the school had instruments to rent out to students, I had come from a family where playing an instrument was highly encouraged, most of my friends were joining, and the people I saw performing and playing in ensembles looked a lot like me. It wasn’t until I cleared my eyes of the glaze of something new that I saw the disconnect.

Around the city now students are organizing to make music more accessible. Musicians United for Student Equality (MUSE) is a group organized by Ethan Feldman, a Southwest senior. MUSE’s goal is simple, “we’d like the district to offer band and orchestra for all students in 4th-12th grade,” said Feldman in an email interview. Although they are at Southwest, MUSE wants representatives from all schools to join in their process. “We don’t really think about this issue being about increasing diversity for diversity’s sake, but rather that this lack of diversity reflects a gap in opportunity between students in MPS,” said Feldman.