“I could see myself in every facet”: HBCUs create alternative support for students 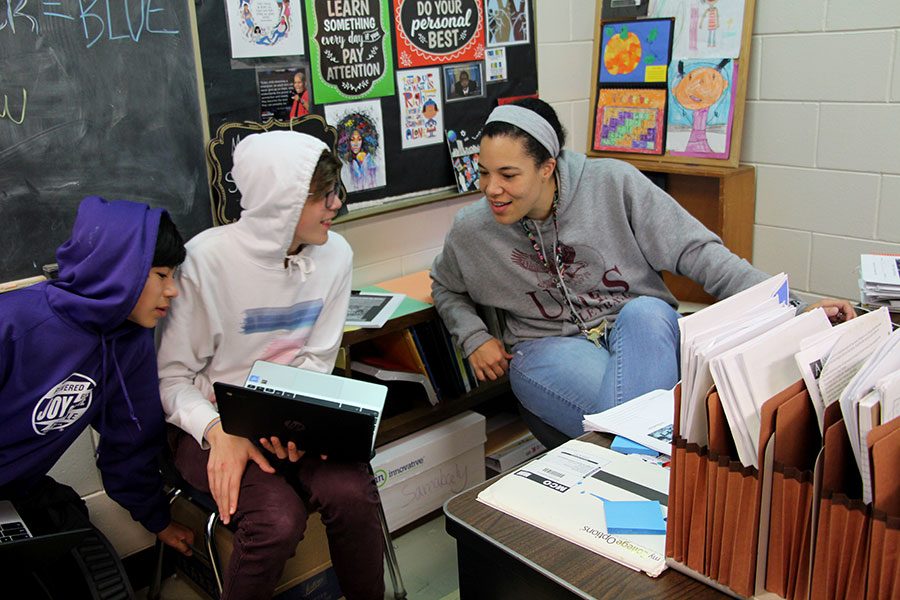 Pictured above Holiday Samabaly, a second year english teacher at South, talks with some of her students while sporting her University of Maryland East Shore -- an HBCU -- sweatshirt. HBCUs are historically black colleges and universities, and they have had a growing amount of applicants in the past years. “I think the most important thing for me in going to an HBCU is I could see myself in every facet,” she said. Photo: Soline Van de Moortele

“I was accepted into six schools, and they gave me scholarship opportunities,” said senior Bola Ogunlana. She, along with fifteen other South students, attended the Empowerment Tour, where 26 HBCUs – historically black colleges and universities – met with students from across the district to host on-site applications and acceptances. Ogunlana is currently being considered for a full-ride scholarship at Lane college, and received $50,000 in financial aid at Benedict college.

“[The Empowerment Tour is] empowering to African American youth to encourage them to go to college to seek out help to follow your dreams,” said Nneka Abdullah, a College and Career Center counselor and chaperone on the tour.

HBCUs were colleges and universities first established to allow Black students to attend school after the Civil War during segregation. 80% of those attending these schools today are black. Qualia Porter, another senior who attended the Empowerment Tour, explained HBCUs are ways for black students to be surrounded with people who looks more like them: “If you don’t want to go to a college with predominantly whites, or if you just want to be around a lot of people like yourself.”

One appeal to HCBUs for students is the shared experience many students have there. “In CIS writing, when you talk about stuff like struggles, nobody really feels what I’m saying because it’s predominantly white,” Asiah Brocks, a senior at South who also attended the Empowerment Tour, said. “When you’re at an HBCU everybody is mostly black or a person of color so they understand where I’m coming from.”

“It’s empowering to be in a space where most of the people look like you,” said Nneka Abdullah.

Holiday Samabaly, a English teacher at South, attended the University of Maryland East Shore, an HBCU established in 1890. “I think the most important thing for me in going to an HBCU is I could see myself in every facet,” she said. Samabaly had attended a Catholic high school with few black students.

“I was not seen as smart or I only had kind of one value when I was at the private catholic school,” Samabaly explained. “When I went to this HBCU, I was told for the first time in my life that I was smart. I could do, and I was able to do, and now here I am, a graduate degree and beyond.”

Many students don’t hear about HBCUs as an option for college. “At first, I didn’t really know about HBCUs, it was just a thing my friends told me about so I researched more,” said Porter. “It’s not really a topic that people speak about all the time, like how other colleges are spoken about.” Samabaly believes students are not nearly as aware of them as they should be.

Along with a growing awareness of HBCUs there is a growing amount of applicants. As Abdullah explained, “I think more students are going to apply, especially with this Empowerment Tour…knowing that that is an option as well when it comes to choosing a college.”

The Empowerment Tour was hosted at the Minneapolis Convention Center on September 22nd. Sixteen students from South attended the tour. Representatives from HBCUs across the nation had interviews with prospective students and reviewed their GPA, test scores and transcripts. They then can admit a student on the spot to the college, and give them scholarships, or consider them for merit and presidential ones.

The schools are also being promoted directly by people, who like Abdullah, work in College and Career Centers. The centers, which are in various high schools across the MPS district, “provide personal guidance and resources to help students achieve their career and college dreams” according to the MPS website.

To Samabaly, HBCUs have a unique support system that isn’t based on race, in contrast to predominantly white institutions. “Institutionalized racism [at HBCUs] is really nonexistent,” she said. “When you’re in a institution where you are an extreme minority, things or actions that happen to you or something, you always have to question or wonder is this because of something else… You always have to kind of walk that fine line.”

“When you’re at an HBCU…you never have to feel like ‘I have to prove people wrong’ or have this extra pressure that is weighed on you by society. That was freeing,” Samabaly said.