From Minnesota to Japan, seniors plan for after high school 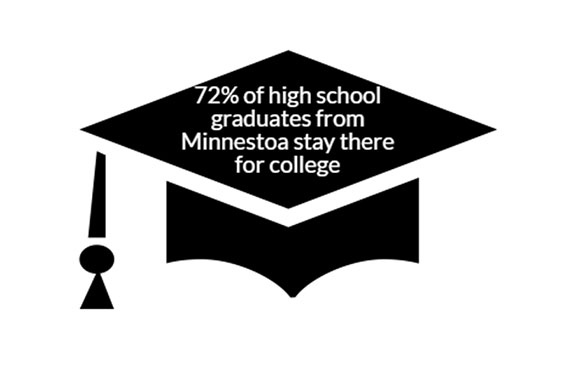 Many students was to leave the Minnesota or even the United States after high school, but only 16% actually leave according to a statistic from the Star Tribune. “I wanted to get away from Minnesota,” said Senior Lindsey Morris, who plans to go to Nicholls State University “I feel like if I went to school in Minnesota I would only know what it's like to live in Minnesota.”

Many seniors right now are finalizing their college choices and their plans for next year. From Japan to cooking school, there are a lot of fun and different things seniors have planned for next year.

Living away from home can be a big part of a person’s college experience. Senior Nadine Stodolka plans on going a bit further than other people have in mind. “I’m going to end up going to the University of Minnesota and then doing foreign exchange in Japan” said Stodolka. “I didn’t want to be in Minnesota and I know that I want to become fluent in Japanese.” Stodolka has been taking Japanese classes at the University of Minnesota for the last two years.

Some seniors are leaving Minnesota but are going a bit closer than Japan. Louisiana bound Lindsay Morris plans to go to Nicholls State University. “I wanted to get away from Minnesota,” said Morris. “I feel like if I went to school in Minnesota I would only know what it’s like to live in Minnesota. I want to experience a completely different culture than what I’m used to.”

College can be a new and nerve wracking phase in a person’s life, and Stodolka and Morris’ experiences are no exception. “I’m really nervous about living in a different county where I don’t really speak the language fluently,” explained Stodolka. “Mostly because I’ve never lived away from home for very long.” She believes she can do it though. “Missing home is what I’m most nervous about,” said senior Lindsey Morris. “I feel like I’m going to be very isolated because my family [that lives near New Orleans] lives an hour away.” Morris is not going to know anyone close to Nicholls State.

Stodolka plans on doing something with english and international relations. “I’m not 100% sure yet but pretty much anything creative and travel,” said Stodolka. “I want to be able to explore and try things I haven’t before.” Stodolka hopes to be in Japan next year and have found a job.

Morris has many hopes for next year including making new friends and finding her place in college. She would like to find things she is interested in and gain knowledge and experiences. “I plan to be more assertive and state my opinion and my thoughts on things because my voice matters too,” said Morris. “I hope to be more free and careless about how people perceive me.”

Some seniors plan on going to colleges that specifically fit them. One of them is senior Fadumo Warsame who will be going to Howard University in Washington D.C. Historically Black Colleges and Universities (HBCU) were established in the late 1800s and early 1900s and were some of the first colleges to let black students attend. Over the years, they have primarily serving the black community and have a focus on African American history. Warsame explained her decision to go to Howard, “It’s a prestigious HBCU and it’s known for its psyche program.”

Going to a HBCU wasn’t Warsame’s initial choice. Before going to South she had only really had white teachers. “Going to an HBCU will be an area where I can fully be myself,” said Warsame. “Going to an HBCU where I will mostly have black professors who share the same background as me.”

Similar to Morris and Stodalka, Warsame is nervous about moving away. “Going to an entirely different place and learning how to navigate through a different city, it’s scary for me,” said Warsame. “I haven’t gotten my financial aid packet yet,” but she hopes everything goes smoothly. She also hopes to be more independent because she will be on her own from now on.

Ausland is not going very far for college but he is moving out of the house. He and two other friends are going to live with each other. “We all wanted to move out of the house and live together,” said Ausland. He is really excited about being independent and everything being on him. “I want to work on making better decisions and thinking things through.” Ausland said.

No matter how far or close these seniors are going for college, they are each nervous and excited about starting a new phase in their life.