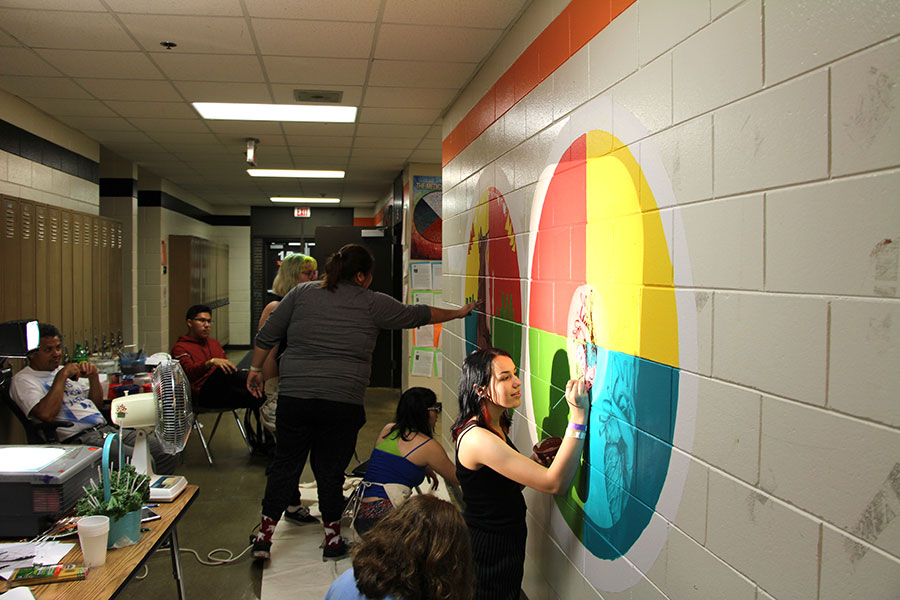 Pictured above students participate in making a mural in the hallway near the All Nations classrooms. Photo: Henry Holcomb

South held its’ second annual Racial Justice Day on May 17th, 2017. There were many diverse workshops, immersive cultural activities, and opportunities for students to expand their knowledge of social justice by stepping out of their comfort zone. The event was primarily organized by Stand Up Speak Up South High (SUSOSH). The focus of the day was redefining South’s general theme: PRIDE. SUSOSH changed the acronym to mean Power, Resilience, Identity, Decolonize, and Equity. Racial Justice Day allowed students to speak up about issues that matter to them, learn about topics and perspectives they didn’t previously know about, and experience the diversity of South in new ways.

Islamophobia, irrational disliking or prejudice against Islam or Muslims, is an unspoken issue in the community today. The workshop was led by South’s Muslim Student Alliance (MSA). MSA talked about how the United States has a history of fearing new immigrants, and how the media has made it easier to spread Islamophobia especially since terrorism in the news gives the public a one sided view of Islam.

“The way I like to see it is that the media is a giant reality TV show,” said MSA leader, and Junior Mohamed Salad. “They take stories that are the most violent. They take stories that are the most intriguing to the larger white community, and they use those stories to get rating. At the end of the day we can have thousands of Muslim students being flagged or being harassed out there in the world, but the media is not going to talk about it.”

What the media will talk about is terrorist attacks. This feeds the public a false idea that all Muslims are terrorists. “I feel like people can go years maybe their whole life without talking about Islam and hating it with all their heart, because of the little things that they see on TV,” said Salad. The workshop’s goal was to leave the students with a sense of hope that Islamophobes can learn to tolerate and accept Islam once they have a better understanding of Islam.

The workshop on Consent, led by Gender Equity Collective, showed that there are many issues that people might not normally think about in regards to race. It covered the basics of consent: what it is, when it’s needed, and what to do if it’s not given, while connecting consent to race. They informed the class of important statistics such as the disportionate imbalance between minorities being raped, and white people committing rape.

Junior Marie Olbekson, a student at the workshop, felt that this was a very crucial subject to teach. “A lot of the power imbalance of [racial] communities gets carried over to rape. [So] when thinking about reasoning and thinking about prevention we have to consider race and how to prevent it in different groups.” Workshop leader Gillian Rath feels that the workshop was important because, “it [gave] people a more broadened idea of what kinds of things are affected by race.”

Although it mainly focused on race there were a variety of other social justice workshops over the course of the day. “How to talk about disabilities” focused on educating South students about what students with disabilities experience within the building.

Student leader Tavin Samara described the goal: “It was pretty much awareness about people with disabilities. We covered do’s and don’ts,” they said.  Samara hopes that students gain understanding of how their actions affect students with disabilities and how the school falls short with meeting their needs.

Senior Ella Barnhill reflected on their takeaway from the workshop: “I understand how tiring it is to be disabled in this school.” The facilitators led an activity where non-disabled students attempted to navigate a classroom in a wheelchair. “Its effect showed me what people that have to be in a wheelchair everyday go through,” freshman Andrew Thoraldson said.

A new addition to the Racial Justice Day this year was a cultural auditorium orchestrated by Unidos and the Asian Student Association (ASA). Both groups have performed in the past but never before together. Anna Keillor, a dancer in ASA, felt that the performance was important because, “It shows how diverse South is…I think that having Racial Justice Day is a neat idea because each culture can show who they are, what they do, [and] what represents them,” she said. Ben Phi, another ASA member and performer, feels that, “[the performance] show[s] what Asian culture is like rather than have people find that out on their own through stereotypes.”

However, both Phi and Keillor feel that both Unidos and ASA should be more strongly represented at South. Keillor believes that in addition to the cultural auditorium, “Unidos and ASA should have something [else] to show the culture, the dance, the music, [and] the food.” Phi added that “We definitely aren’t given enough time to showcase a lot of Asian cultures.”

In addition to the cultural performances led by Unidos and ASA, All Nations led a workshop about the Native American sport of lacrosse to allow students to learn about Native culture. South student Jesse Henry explained the importance of lacrosse to him: “It’s a traditional sport and we are trying to revive our culture. This is known as the medicine game, so whenever you are down or something it makes you feel better.”

All Nations coordinator David Butler (Bezh) explained the reasoning behind a more active workshop, “What we try to do at All Nations, is more experiential learning… people learn better by just doing it instead of sitting here.” Bezh hopes that students learn that the sport of Lacrosse originated from Native Americans.

Overall, Bezh talked about the importance of playing Native lacrosse: “Through the removal act, and just a lot of other bad things done by the government a lot of nations have gone extinct. If not, their identity, their language, their culture is just gone. Even just having lacrosse… we are continuing to create social justice just by bringing back stuff that we would just normally do.”

After a long day of immense learning, hearing the heartfelt passion for issues in the community, and bonding through cultural differences, everyone was left with different impacts and experiences. Collin Robinson, a guest presenter from Southwest, stated that he believes, “[Racial Justice Day is] a place to speak, a place to learn, and a place to grow.” And as South High junior Fardous Hassan said, “Racial justice day is not about who’s wrong and who’s right. It’s just about learning something new.”