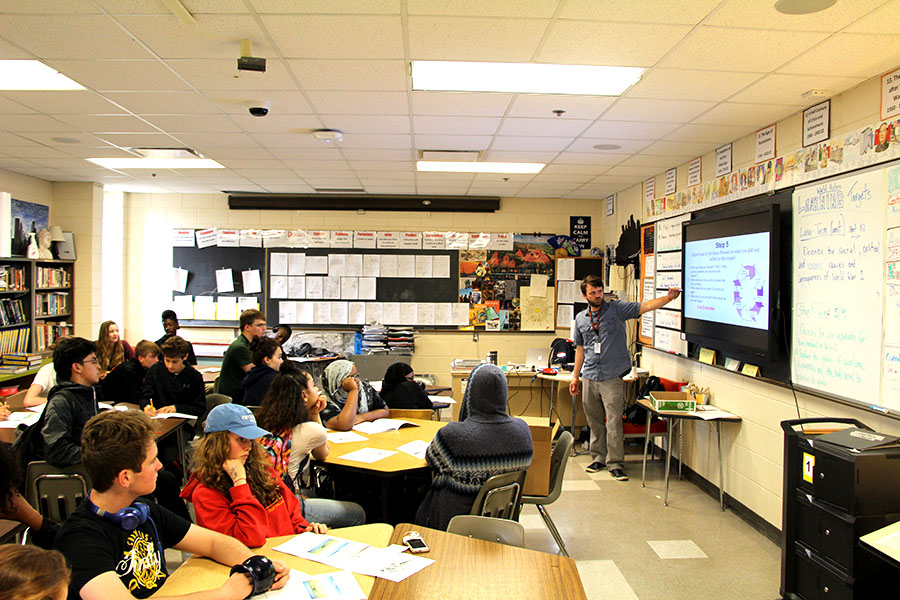 Social studies teacher Elliot Hanson, teaching Humanities I at South. Next year Hanson will be teaching in Thailand as a part of a two year program that sends teachers overseas. Hanson is excited for the new experience, “All the new experience I think will add to my teaching ability and overall skillset of teaching in a different culture and adapting to them instead of students having to adapt to me. I think [the experience] will be unique,” he said.

Over it’s one hundred and thirty two years, South has seen its fair share of teachers.  The school changes lives of students, but often overlooked is its profound impact on the teachers of this building.  However, teachers don’t always spend their whole career within the same position.  What are some of the paths that teachers take after leaving their previous position?  How has teachers’ experiences at South affected their life and future choices?  How do teachers pursue educating others once their position changes?

World studies teacher Elliot Hanson will be going a lot farther away than just another classroom. Hanson and his wife were accepted to a program that allows them to teach overseas in Thailand. “I really love South, it was really hard for me to make that decision to go,” Hanson said. “I wanted to experience living in another country for two years for sure and then who knows how long after that.”

Hanson spoke of South’s profound affect on him. “Working at South kinds opens your eyes to all the different viewpoints and just all walks of life and cultures and stuff and I think it has led to me being more interested in living in different countries,” he said. “Being here with so many kids from different countries and trying to get a perspective from their points of view and understanding that basically all humans have the same general wants and needs and so I want to experience [different cultures] first hand.”

Hanson wishes to maintain a connection with South while he is teaching abroad by finding a way of sharing his experience in Thailand with South students and teachers. “When I’m there, it might be a unique experience there to have students communicate back and forth or teachers communicate to share those cultural differences or similarities.”

Hanson looks forward to the opportunities that this change will bring, “I teach world history so I’m fascinated by that region as far as… from a religious standpoint and the eastern beliefs and the uniqueness of… different parts of Southeast Asia that I’m really excited to go [to] and visit.”  He enjoys the experiences and connections he made in Minneapolis but also wishes to step outside of his comfort zone, “All the new experience I think will add to my teaching ability and overall skillset of teaching in a different culture and adapting to them instead of students having to adapt to me. I think [the experience] will be unique.”

Hanson wishes to one day return to South, “Hopefully I don’t regret [leaving South] because this is a place where a lot of teachers want to teach…hopefully I return at some point to teach at South because I do love it here, said Hanson. “There’s nothing about the school or South that has made me want to teach overseas but ideally I would come back and get my spot back at some point.”

Although Hanson’s change was voluntary, former performing arts teacher Tinne Rosenmeier did not share the same experience.  Rosenmeier spoke of the changes that came after being excessed, (displaced within the school due to budget cuts) from her former position at South, “I was placed at South by the Human Resource department as a Reserve on Special Assignment (ROSA)…until the district had a different job for me, I was to be a last minute sub, and also help around the building.” She said,  “Everyday, I stopped to chat with [school secretary] Ms. Karen Holly in the office to see if she had a last minute spot [for me] to fill…If she did not, I went to the Media Center to help support that space.”

For Rosenmeier, this change was good and bad,  “Well, at first it was very, very hard. I felt that I’d been shamed by the district or targeted by the administration… I was very sad to lose the chance to really build a high school, classroom based theater program,” she said.  The budget cuts occurred late last school year after classes had already been determined for the 2016-2017 school year.  Rosenmeier had already planned and cleared advanced drama classes for the school when her position was excessed. “When hopes build up like that, it is hard when they are smashed for reasons outside of your control.”

Although the change was harsh, her new position was not all bad.  Rosenmeier noted that she experienced less stress and better health. “In many ways, the ROSA job was a great gift in terms of the opportunity to serve the school and also refurbish my heart and soul.” She said.

Changing positions within South caused Rosenmeier to look at her situation differently, “I made a list during September titled, “Ways My New Position Doesn’t Suck,” she said.  “One of the things I put on that list was the opportunity to learn from other teachers.”  Rosenmeier observed the wide array of teaching styles and environments at South.  “I learned some really cool stuff as a guest in those rooms,” she continued, saying, “Sometimes I got to be a co-teacher, which was cool because I had opportunities to observe teachers doing their thing.  Since I am wide open to learning how to be a better and more effective teacher, this was awesome.”

Rosenmeier additionally enjoyed building new relationships in the Media Center.  “As for students, I got to know lots of kids who would never have entered a theater classroom if given a chance… I had a positive, supportive role with many students,” Rosenmeier said.

Rosenmeier has recently moved to Sheridan Dual Spanish Arts Immersion School.  “I am the Dramatics teacher here until the end of this year.  I don’t know where I’ll be next school year.”  She is starting her third week at Sheridan, “When things go well, I’m playing games and guiding kids to try some basic theater/drama skills.  When things go rough, well, I’m trying to keep a room full of 4th graders from hurting themselves or each other.”

Anne Marie Plante is another former teacher at South who now serves a new role in the building.  Plante has taught multiple languages over the course of her career but now she has moved away from that position. This year has been the first year of Plante’s new position as Advanced Academics Coordinator.

With her new position, Plante is promoting higher academics, “I have also promoted sustained academic success by re-instituting the quarterly honor roll events, providing ACT test prep,  and expanding community outreach for higher learning, like the recent visit to Abbott-Northwestern Hospital that I arranged for students interested in medicine.  I have also worked hard this year to support and develop our relationship with MCTC, where the largest number of South students start their college careers.”  In addition to this, she is working to implement new classes within the building, “I have been working on developing and supporting new course offerings, like the AP Principles of Computer Science and AP Studio Art coming next year.”

Plante sees her new position as a means of helping students who want to achieve that higher level of scholarship, “In my own learning and professional practice, I have often seen how challenges provide opportunities for growth. I believe that every student has unique strengths that can be nurtured to ensure academic success and lifelong enjoyment of learning.”  Her new position serves to push students to the peak of their potential and the help pave the way towards students pursuing their dreams and passions.  By promoting courses like the Advanced Placement (AP) courses, Plante puts students on the way to earning college level credits in high school.  These courses and credits are extremely valuable once the student reaches college with them often saving the student a full year’s worth -and thousands in dollars- of classes needed to earn a degree.

Although all three teachers share different stories, they continue to pursue occupations that impact students and empower them as they are growing up.  Hanson is going to pursue his teaching in Thailand, Rosenmeier continues teaching drama in Minneapolis Public Schools, and Plante is promoting higher education inside of South.