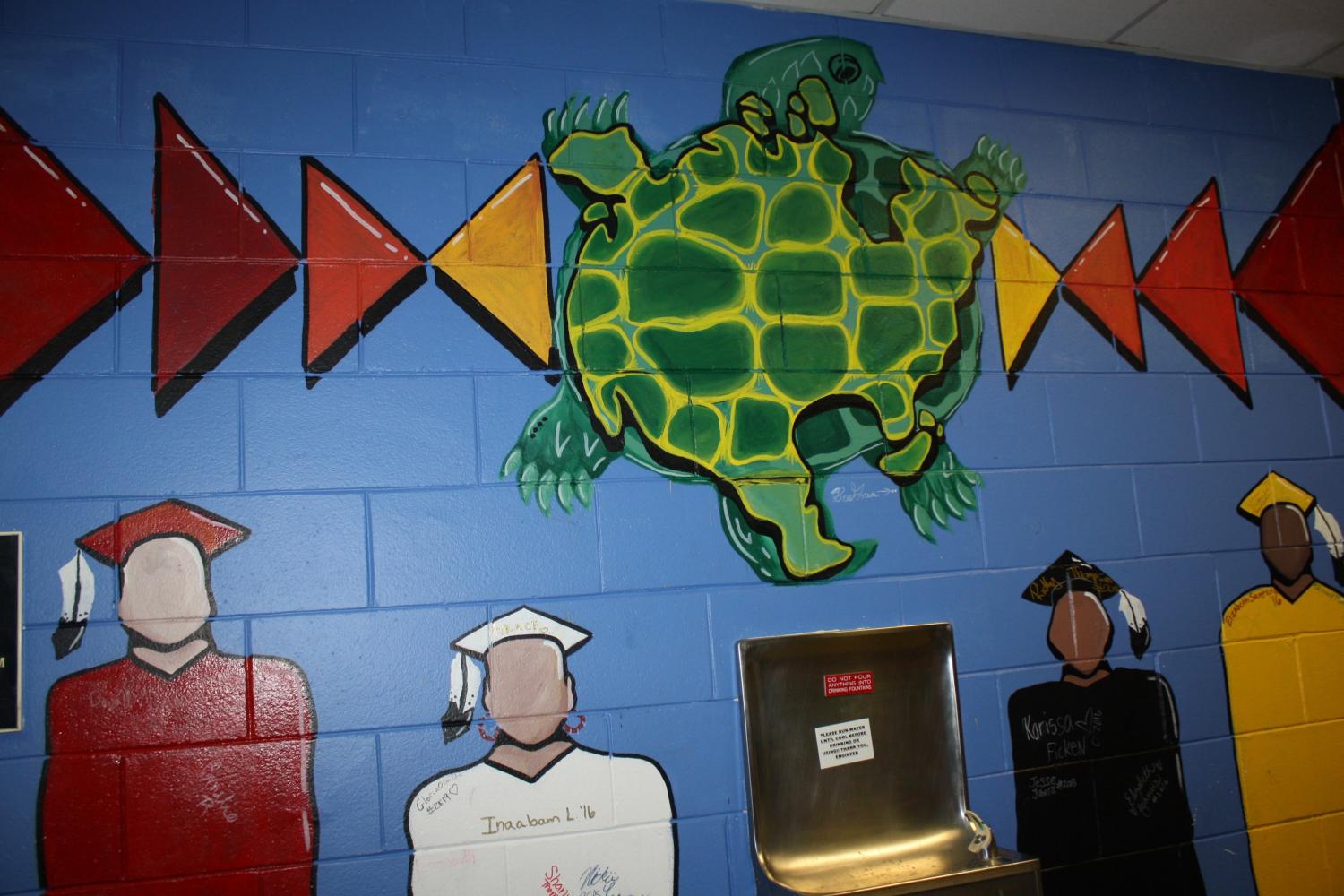 Breanna Green painted a “graduate” mural on the wall in the All Nations hallway last year. She won the “Dream Warriors scholarship”, for using her passion for art to define what it means to be a leader. Oftentime, her art incorporates Native American traditional aspects along with modern ones. As All Nations social studies teacher Vincent Patton said, “she has a lot of traditional aspects to her art but she is also intertwining her new modern contemporary urban Native American flair.” Photo: Sophia Manolis

Recently, Breanna Green, a senior from the All Nations program, was chosen as the winner of the Dream Warriors scholarship, which is a national scholarship for Native artists.

To apply for the scholarship, Bree had to submit an essay about what she thinks the definitions of a leader and a “Dream Warrior” are. According to Bree, “a leader is someone who takes their community with them, by using whatever art that you like doing… whatever you like to do is being a leader within itself.” She continued, saying that she thinks a Dream Warrior is “Someone who’s willing to step up…. [who has] a lot of bravery…. [and] who’s using their talents to stand up for what they believe in.”

This is the second year that the scholarship has been given out. Of all the students who apply throughout the nation, only one is chosen to receive it. According to its website, the scholarship is awarded to whatever applicant exemplifies the most qualities of a “Dream Warrior”: someone who uses their passion to provide for their community, who relentlessly pursues their own dreams and passions, and who always acts out of a place of love.

According to All Nations social studies teacher Vincent Patton, who has taught Green for several years and knows her very well, she fits many of these qualities. “[Green] is beyond unique. There is not another Native American student I have or have ever had that is such a talented artist,” Patton said. Even more, he added, “She has this gift but she is not overly proud… she is very humble in the ways that she presents her art.”

Green’s humbleness is very apparent from talking to her: she doesn’t brag about her art at all. However, there is no doubt that Green is a true artist. She paints, draws, and likes photography. Her paintings can be seen on the wall of the All Nations hallway, she has designed All Nations t-shirts, and she sells her art to whoever wants to buy it.

Patton believes that Green’s art is unique because “she has a lot of traditional aspects to her art but she is also intertwining her new modern contemporary urban Native American flair…. from the background of a city, to incorporating blueberries and traditional floral patterns…she is able to have a little bit of urban, but also integrate the Native American traditional ways.”

According to her art teacher, Cynthia Berger, “she’s really bold and she has a specific style… you kind of recognize her work without really knowing who the artist is.”

Green’s paintings are often abstract. One of her paintings shows a human heart with teeth surrounding it. At first, the painting’s meaning may not be apparent, but according to Green it means, “speak from the heart.” She believes in using art to bring about a deeper meaning because, “it helps people understand… what message you’re trying to portray. It’s easier to understand something if you can see it.”

Green says that she likes painting “stories… inspirational stuff… [and] experiences.” She also feels that art is very important to Native American culture. “I think that a lot of stuff in our culture has to do with art… that’s what our culture is built from.”  She said receiving the Dream Warriors scholarship was like “being rewarded for what [Native people] do on a daily basis.”

Through the scholarship, Green has received $500; and she will benefit from the award in other ways as well. “I think this just helped me realize that I can [do more]…. It makes me want to further… my art,” she said. In Patton’s words, “It’s only gonna build her confidence…she’s so humble about her skill…. [the scholarship] gave her more confidence in the fact that she is a great artist.”

Green has already gained many opportunities from her art. She displays her work throughout Minneapolis and has had the opportunity to participate in the Oscar Art Institute at the University of South Dakota. Her art career will continue as she goes to college next year at Dunwoody College of Technology in graphic design.

“She works really hard… she does stuff that she likes,” Berger said. “She’s not doing [art] because she has to, she’s doing it because she loves it, and it shows in her work.” Green’s work has inspired many people and the Dream Warriors scholarship has only affirmed her talent and uniqueness as an artist. As Patton concluded, “I can’t wait until she’s old and I can say I knew that one.”