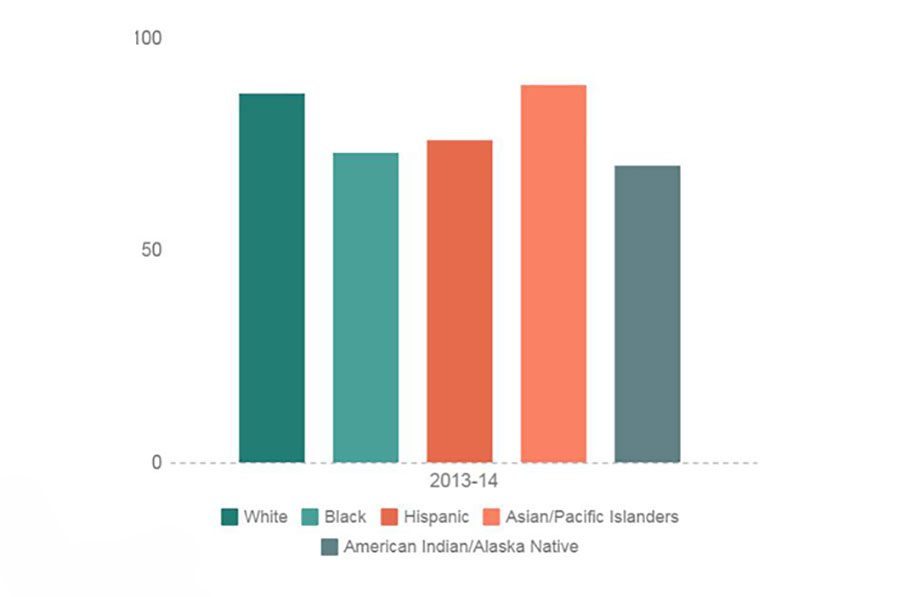 The graph demonstrates the percentages of students who graduated with a normal high school degree organized by their race during the 2013 through 2014 school year. Native students have some of the lowest attendance and graduation rates in comparison to other races of students. The “Dream Big Attendance Raffle” is giving away a 250 gift card to Native students in the Minneapolis school district every quarter to encourage attendance.

This year, for the first time ever, South High students in the All Nations program are eligible to win a 250 dollar gift card for good attendance.

The “Dream Big Attendance Raffle” is something available for Native American high school students in the Minneapolis public school district. If a Native student has a 95% or higher attendance rate, including excused and unexcused absences, they are eligible to enter into this raffle. The prize is a 250 dollar visa card that can be spent anywhere. The drawings are held once a quarter.

This giveaway isn’t just for fun and games however. The point of the raffle is to show students that “there is payoff for being here,” David ‘Bezh’ Butler, an All Nations coordinator and Ojibwe teacher said. Attendance rates in high school students has always been an issue, but Native students especially have a very low attendance.

This incentive for maintaining a good attendance has made a noticeable difference in the amount of All Nations students who showed up to school. “Our attendance has grown drastically because of this, I would say upwards of 20% which is huge for a small program of 110 kids in All Nations,” Vincent Patton, the All Nations social studies teacher said. Butler also noticed that “there has been increased motivation in wanting to make that 95-100 percent.”

After the giveaway began students began to see the change in attendance as well. “It encourages [students] to get the prize, and there has been improvement,” Senior Amber Olvera Whirlwind Horse, one of the winners of the giftcard said. “I see younger people than me who didn’t go to class now coming more,” Olvera Whirlwind Horse said.

While having a raffle for a 250 dollar gift card has been a good way of encouraging students to come to school more often this year, many people agree they would like to see more of a reward for students pushing hard to make good attendance. “I truly wish it wasn’t just the 250 dollar gift card. What our hope would be is that all the students that receive 95 percent attendance or better… that there’d be more incentives,” Patton said.

While there were many kids who had a high enough attendance to be eligible for the giveaway, only one person will win it each quarter. “I think they were a little salty they didn’t get anything except a certificate,” Butler said. Olvera Whirlwind Horse believes that “giving out [smaller] prizes… acknowledging that they’re coming here and trying,” would be more rewarding for the students pushing hard to make it on time.

There are many reasons why students don’t always make it to school. “I would just come to school really late, and not wake up,” Senior Tatianna Gonzalez, another student who won a giftcard said while talking about her attendance before the giveaway. “Not getting enough sleep, [or]  they live far away,” Olvera Whirlwind Horse said some of the reasons were. “I have a lot of friends that live far away and they don’t take the city bus, they don’t have the Go-To cards. Or just bad influences, like drinking and skipping school, doing drugs and stuff like that,” she continued. Some students also have to “be an adult at an early age” and take care of younger siblings or other family members.

For many Native people family is usually one of their number one focuses. “Things come up and there is no way to get around- like if somebody passes away [the students] are gone for a week,” Butler said.

One of the reasons family relationships are stressed over schooling is because “a long time ago it was government policy to take Indian kids from their family,” Butler said. The American government forced Native children to attend boarding schools. This caused a huge disconnect between the older and younger generations, and a giant loss of culture. “You’re taking away all the culture and traditions,” Butler said. “Lack of trust in the educational system is leading parents to not emphasize school as a super important thing,” Patton said.

“[Students with a low attendance] probably don’t have a good support system at home,” Gonzalez said. However if we want attendance rates to change it is important for students families to be supportive. “The most success I’ve seen from families is when they are checking on their kids’ grades everyday,” Butler said. “It’s easier for family… they know their kid a lot better, they know when and how they can kinda motivate their student forward” Butler said. One of the ways Olvera Whirlwind Horse has maintained such a good attendance was through parental support. “My dad helps me come to school,” she said.

Not only is it important for families to be supportive of the students, but both the school and teachers here need to offer support as well. “The biggest thing that teachers can do is call home and build relationships,” Butler said. “You gotta make your classroom a place where somebody wants to be. If they have to be there it might not be so easy getting to work with them. Finding out where a student is and moving them forward at a comfortable pace is something very difficult to do when there is no relationship there,” Butler said.