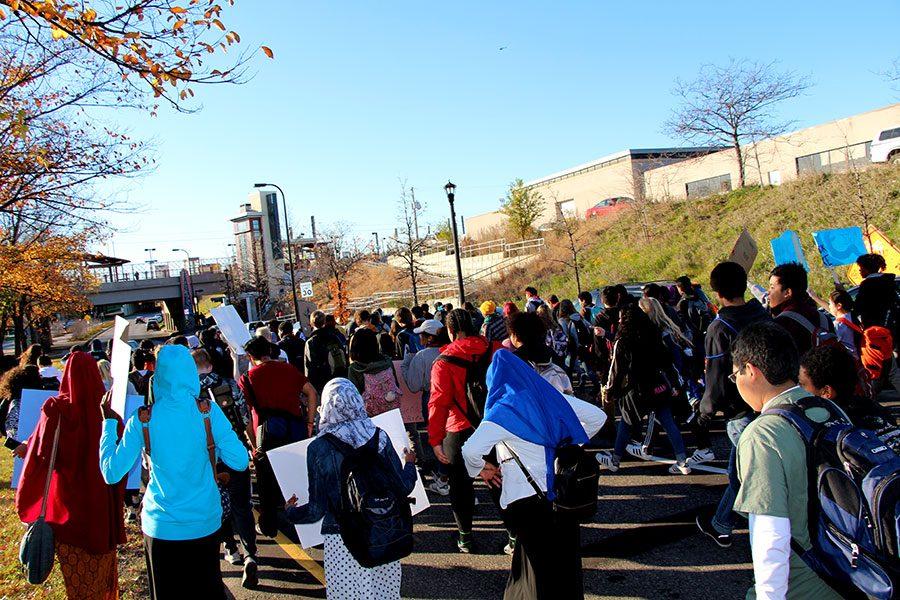 South students walking out of school in protest of the Dakota Access Pipeline. On December 4th the Army Corps. of Engineers denied easement of the pipeline, and is exploring other possible routes. Photo: Lil Crawford

Tannen Holt, Staff Writer, with some reporting by Lil Crawford

Running from North Dakota to Illinois, the Dakota Access Pipeline (or DAPL for short) is a feat of engineering and a major profit for the Energy Transfers Company, a main owner of the pipeline, and a benefit for oil companies across the country. A controversy from the very beginning, its construction was announced in June of 2015, and protests against the pipeline followed shortly after. Protests in solidarity have spread across the in United States, including walkouts at South.

Defenders of the pipeline cite jobs and economical benefits as some of the positive outcomes of the pipeline. According to Energy Transfers, construction would offer around 8,000 to 12,000 temporary jobs. The pipeline would also create $55 million in property taxes each year.

Another main issue for many activists opposed to DAPL is not just the water itself, but who it is directly affecting. The pipeline would pass ½ a mile from the Standing Rock Sioux Indian Reservation and would be built through sacred burial grounds of the Standing Rock Sioux Nation. It threatens to damage the government’s connection with Native peoples, as well as the people who are supporting the NoDAPL movement.

As of last spring, the Army Corps of Engineers has been engaged in a lawsuit filed against them by the Standing Rock tribe, accusing them of violating the National Historic Preservation Act of 1966, as well as a violation of the Rule of Law.

On December 4th, the Marine Corps of Engineers has denied the easement of the Energy Transfer Partners from the Dakota Access site. This was a win for the protesters after months of camping out in strong weather conditions and facing resistance from police in forms of water cannons and tear gas.

Many South students have been active in the fight against D.A.P.L. by participating in walkouts and protests. “This water is a privilege” is taped above a drinking fountain on the third floor, as a reminder of the struggle and uncertainty taking place in North Dakota right now.

One of the students that participated in the walkout last fall was Junior Alexis Catara, who was interviewed at the walkout. They explained that they were a little nervous because of their parents’ disapproval of any kind of protesting. However, Catara felt differently. “It’s too important of a topic to be silent about, it matters a lot to me and that’s why I’m out here today. The people that are affected by this are hurting and silence hurts them more,” said Catara.

A handful of students from South, as well as a decent portion of students in the MPS district have even gone to Standing Rock to give their own contributions to this cause.

Senior Thor Paulson, who was there the weekend of November 25th, says the atmosphere was much more mellow than the media describes it.“The other protesters treated us very well. Especially as white people, they accepted us and showed us around. Most of the time it’s pretty low key up there. There aren’t usually like signs or shouting or anything. We didn’t encounter too much of that. I think overall, mood there was pretty nice.”

Paulson also compared it to being community gathering of sorts.“In the downtime I think you could pretty easily forget that it was the site of a protest and that there was a lot on the line,” he said “I feel like a lot of it was just people there trying to get on with day to day life, you know? When food was gonna be served, when events were happening, etcetera.”

Breanna Green, a 12th grade Native American student in the All Nations program (who was there the night of September 10th) described the mood similarly to the way Paulson did. “When we first got there, everyone was really welcoming. There were these check ins, just to make sure that people who were going in and out were safe, and also just to great all the people who just came in. Just like, ‘Where you guys from? What’d you guys come here for?’”

However, the weekend Paulson was there, local officials were prepared for the worse: “There was a ridge that we went up on, and we were looking at them with binoculars. And there were actually snipers that you could see posted up on the other side of the river,” said Paulson, still in awe at the memory. “One of the people that we were with pointed out glint in the bushes over there, those were snipers looking at all the protestors. They also had these helicopters coming by as well. Which is like, a huge violation of air space. Luckily we didn’t have too many actual face-to-face encounters with the police.”

However, rumors are swirling that this is not the end of the Dakota Access Pipeline.  The Army Corps. plans on conducting environmental impact studies for other possible routes of the pipeline. Beyond that, the future is still uncertain especially with a Trump presidency ahead. In the past, Trump has voiced support for pipelines similar to this one.
Green is not yet ready to let her guard down. “I was kinda in disbelief, I’d say. Because it seemed like after going through so much to fight against it, they’re just out of nowhere like ‘Okay, alright we’ll [leave].’ It’s kinda like when you’re playing tug of war, and the other person just lets go. You’re kinda like ‘Well, what do I do now?’ I don’t think this is enough to just drop it and go home. People still have a reason to be there.”