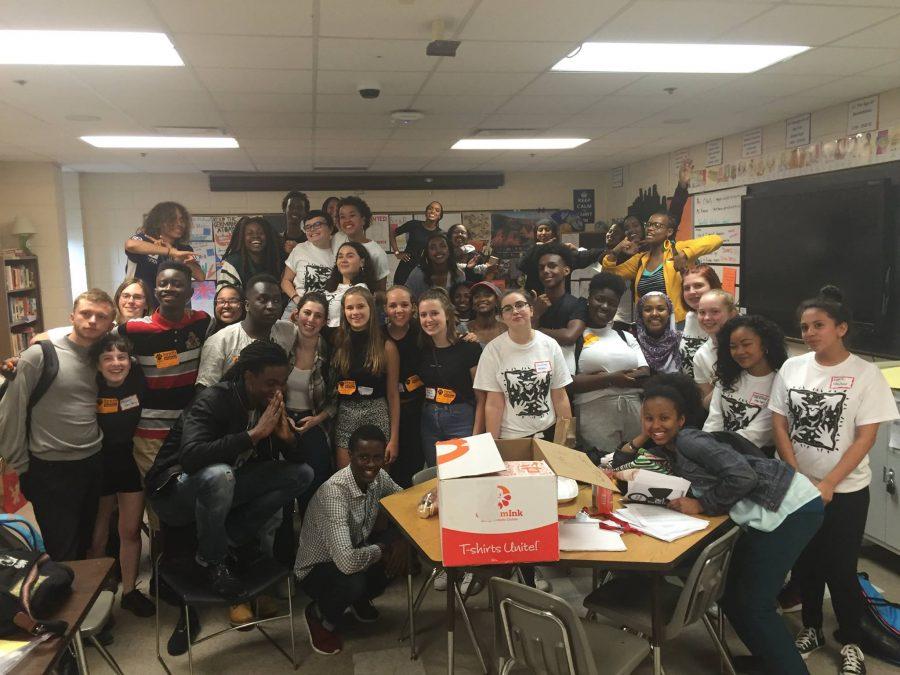 South students and staff as well as outside community members came to lead workshops on race and identity on May 23rd at South. This day was organized and led by SUSOSH (Stand Up Speak Out South High), a student led group aimed to dismantle insitutionalized racism. Photo: Abby Rombalski

May 23rd, 2016, marked the first Racial Justice Day at South. Organized by Stand Up Speak Out South High (SUSOSH) – a student led group aimed to hold conversations and dismantle racism – RJD featured workshops led by community leaders, college students, Southwest and South activists. Racial Justice Day featured fifty workshops to choose from, ranging from institutionalized racism to prison to school pipeline to environmental racism. Each workshop was grouped into one of the following categories: justice, identity, culture, or art. An estimated 1,100 student participated in RJD.

The goal of Racial Justice Day was “to start a conversation about race for the whole school that wouldn’t end, that would continue,” explained SUSOSH member and sophomore Caroline Haarman, who led a workshop on intersectional feminism with freshman Natashia Otisio. “So, it wasn’t just about the day: it was about continuing the conversations about the diversity of our school school-wide not just in one classroom.” Haarman said.

RJD faced some difficulties over the course of the day. “I don’t think everybody was informed about what it was gonna be like until the morning of,” explained Oas. The short notice was something difficult for some teachers to adjust to according to Aponte. “I don’t think I’d want it to be so close to the end of the school year,” he said. There was a low attendance of students, and some outside workshop leaders weren’t able to make it – sometimes without warning. “A lot of people were like ‘Oh it’s a day full of unnecessary things let’s skip school,’ ” said Oas. SUSOSH members Rebecca Jaja and Haarman agreed the scheduling was difficult, and in future years more time would be useful. “You gotta understand, this was put together by students and we didn’t have a whole bunch of time.” explained Jaja.

The workshops were led by both South students and teachers as well as outside community leaders. YPAC (Youth People’s Action Coalition),The Forgiveness Project and Communities United Against Police Brutality were a few of the dozens of outside organizations led workshops. Viola Onikoro-Arkell, South sophomore, co-led a workshop with Teen Council, a teen group with Planned Parenthood that focuses on giving teens accurate sex education. Her workshop showed a timeline of events related to reproductive rights of people of color aimed to bring awareness to racism in reproductive health:“Reproductive rights, when you talk about it, is something that so easily can become a white straight cis feminist thing and I think the way we did the presentation very much wasn’t,” Onikoro-Arkell said.

Michelle Ockman and Mary Manor, both Open teachers at South, facilitated a workshop together named “Story circles.” This workshop entailed students sharing a story they have experienced either directly or indirectly about racism with another student, then the pair choosing which story to share to a bigger group, and so on. “People were really shy at first to talk and kind of share their stories, but then once we got going, things made more sense, and then after the first round they got warmer, and kept getting warmer,” she explained.

“I wanted people to know that you’re not gonna solve racism in one day but there’s a difference between watching something and going past it and doing something about it, and the difference is you.” -Rebecca Jaja, sophomore.

Overall, staff and students were happy with this day, and found it to be successful.  “I had a goal to get myself talking about it more and I had a goal of speaking up in different workshops instead of just listening or sitting in the corner, which I think I definitely accomplished” said Oas. SUSOSH plans on continuing this event in the upcoming years at South.