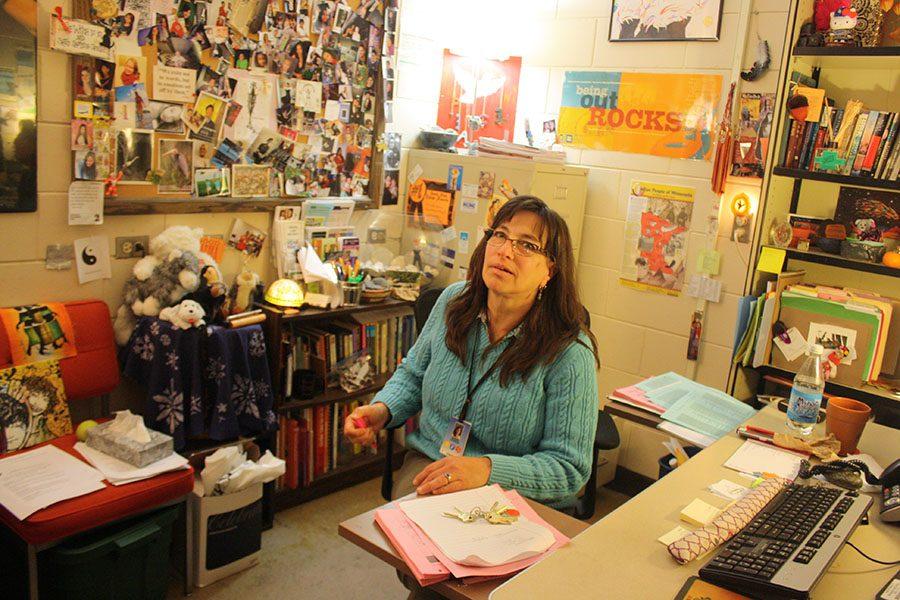 Social worker Sheri Harris in front of a bulletin board pinned with photos of students she has seen. Adults in the building have noticed a steep increase in mentall illness among their students. Meanwhile, the social work department is being cut a .5 position next year and is re-structuring so social workers can be more locatable. Photo: Anna Kleven

Tanya Hodge is one of many teachers who has noticed the mental health of their students worsen over the past few years. Her students have reached out to her in emails, stopped her after class, and in some instances, sought her out in crisis.
By now she’s familiar with the refrain: “‘I’ve been really sad for months. Haven’t been able to eat or sleep, but I have no one to tell. I’m putting on this facade every day and I can’t wear this mask any more.’”
“It rips my heart out,” Hodge said. “And I don’t always know how to deal with it.”
She is concerned about student access to therapy and social workers. And she’s been grappling to understand the source of the sadness and anxiety, and how to best meet her students’ needs in a building understaffed in mental health workers.

Increasing needs
One of those mental health workers is 9th-10th grade social worker Becky Wood, who receives referrals almost every day from staff. Drawing on 23 years of experience in school social work, she said the increase in mental health needs is impossible to ignore.

“It’s probably partly attributed to a better understanding … that not everything that looks like ADHD is ADHD, and that anxiety is underlying a lot of other things,” she said. She also suspects that the “constant interruption” of technology spreads teens too thin by preventing them from being present in one place at a time.
Math teacher Morgan Fierst called the trend “drastic” over her seven years in the classroom. She speculates that worsening mental health may be due to prolonged experience in the standardized school system.
“Their whole schooling experience has been under … this standardized test craze,” she said. The pressure to perform is also felt by families and teachers, who in turn push students to the breaking point. Fierst clarified that the increase isn’t caused by “every educator,” but is a systemic issue.

Statewide shortage
When junior Kairi Dao sought mental health support, his first stop was his counselor. South counselors, like many others across the country, are stretched to meet the academic and mental health needs of their assigned students. The maximum recommended counselor to student ratio is 250:1. South falls just below the soaring national average of 460:1.
Minnesota lawmakers, including Governor Dayton, are pushing schools to make the counseling shortage a priority.
“[Counselors] have a much broader job. Some of them are more trained or inclined to do mental health work than others,” explained Wood. For the most part, counselors refer students with mental health needs to social workers and therapists. They also coordinate schedules, track academics, and advise post-secondary plans.
Dao’s counselor referred him to the school-based clinic, but when he went to the clinic toward the end of his sophomore year, there was no space for him to see a therapist. According to Kate Tkadlec in the clinic, all 40 spots are filled by winter break. Finally, Dao was referred to Wood, and when he entered 11th grade he began seeing Katie Fritz. “Social workers as a whole, they are actually hard to locate. People are not as aware of them as a viable resource,” Dao said.

‘You can’t wait until tomorrow’
Wood does her best to make herself locatable, but meetings and walk-in appointments make her availability irregular. “If I’m in a meeting or if the teacher can’t find me, [they] are gonna handle it the best they can. It’s one of those moments where you can’t wait until tomorrow. That happens, unfortunately and that’s related to how busy we are,” she said.
She would never turn someone away. “I might, in a moment, say can we make an appointment … but it’s always related to context. Is this an emergency? Sometimes there is some juggling,” she said.
Once connected with Fritz, Dao was surprised at the expanse of services social workers offer.
Social workers contact social services like food shelves and outside mental health support. They can mediate conversations with teachers and help plan accommodations for students. It was especially important for Dao to have support at school because he doesn’t feel comfortable speaking with his family about mental health after past incidents.
When 2015 graduate Sofie Everetts was discharged from the hospital last January, she nixed plans to do PSEO and took classes at South where she began seeing her social worker Sheri Harris. She wasn’t looking for talk therapy. Instead, they exchanged book titles and became good friends.
“I met with Sheri once a week and she was a really great resource. It wasn’t therapy, but we talked a lot about books, and we really connected,” she said. Everetts said this was part of Harris’ style, but she also sensed that friendly conversation was exactly what she needed.
According to the National Alliance on Mental Illness, between one in four and one in five high schoolers nationwide has a mental disorder. Because South has a majority minority students, this number is likely to be much higher. African Americans are 20% more likely to experience mental health issues, and half as likely to seek support. About 50% of students with a mental illness drop out of high school.
Without doing the math, Wood knows that many students are falling through the gaps. “I am part of a resource that is inadequate. Knowing that doesn’t make me feel less stressed about doing what I know needs to happen for students. But I am saddened by not being able to meet all the needs that I see,” she said.

‘I’ve been more informed’
Social workers are what Wood calls “soft money” – they can be cut based on the priorities of the administration. Unlike classroom teachers, the Department of Education doesn’t have a formula for how many social workers, school nurses, and secretaries work in the building.
“You have to prove that you are of value to the building. And that’s fair,” she said. Evaluating the “performance” of mental health workers is not easy, and Wood remains somewhat in the dark about the administration’s methods of supervision over her and her colleagues.
She is also frustrated at the lack of transparency about the decision to cut social work by ½ a position, leaving South with 4 social workers. “I’ve been in some schools where I’ve been more informed. I’m very much a process person. I don’t expect to like every decision … but I just want to understand how the decision was made,” she explained.
Fierst agreed that the process should not be made behind closed doors. However, she does understand the necessity of making unilateral budget decisions, considering the size of the school. “If you’ve ever seen South teachers try to make a decision together, it’s never gonna happen. So at some point somebody’s gotta make decisions,” she said.
Social worker Sherri Harris appreciates that South Principal Ray Aponte wants to keep resources in the classroom. That said, she maintains that many students’ situations are so pressing that they aren’t ready to be in the classroom.
Wood said that having five social workers would cut down on the time they spend away from their office in meetings. But having accepted the budget cut, the department is re-organizing.
“We are trying to anticipate and trying to figure out if we can serve this building and meet their needs more efficiently … or divide up who we see so that we’re better at what we do. We have not made any final decisions,” she explained.

‘Love Pedagogy’
Fierst said that supporting students through mental health issues is complicated. “I think it’s super important to be supportive and understanding … But it’s also important not to always give that as an excuse to completely disregard academics,” she said.
Most of what she knows about student mental health she learned from working through specific student situations with social workers. Almost every Friday, Fierst sits down with her class roster and notes the students she’s concerned about. She sets deadlines for herself for social work referrals.
According to Fierst, there are always professional development opportunities related to student mental health, but these are only required for re-licensure once every five years.
From her experience, one-time trainings don’t substantially change behavior. She believes that having proactive and accessible social workers is more important. Ideally, Fierst said, students would visit their social worker regularly and the social worker would contact teachers with concerns, instead of vice versa.
Hodge sees a need for psychological first aid training for teachers. Beyond a teacher’s ability to respond to crisis, she thinks classrooms can do other things daily to improve, or at least not worsen, the mental and emotional health of students. A classroom that acknowledges and accommodates mental health issues is one piece of what Hodge calls “love pedagogy.” “Liberating the mind would be being able to say ‘I’m really having an off day. Can I walk through this with somebody?’” she said.
Even if teachers were better trained, Dao would always prefer to see a professional mental health worker outside the classroom. “Even though they do have some kind of training … it would be basic training. Sometimes the scenarios can be pretty intense for a student … When it comes to a class-based setting, I think it would affect that teacher toward that student,” he said.
Hodge tries to de-stigmatize mental health by mentioning her own mental health in class. “You can feel that ‘OK, even if I’m not going to talk, I recognize these feelings as not out of the ordinary,” she said.