An inside look comparing five city schools: “What would it have been like if I had gone to . . . ?” 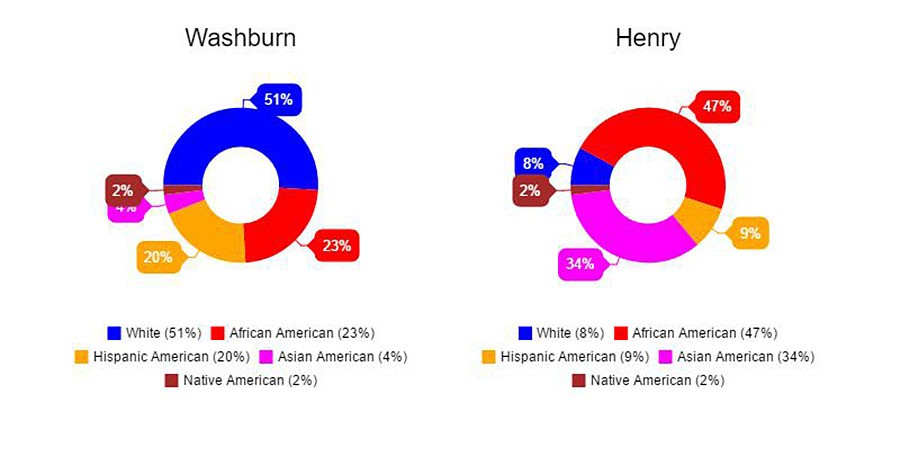 A breakdown of the ethnic diversity in Washburn and Patrick Henry high schools.

The link to the interviews of Roosevelt and FAIR students are here.

We interviewed junior Nora Lahm who transferred from Washburn High school to South this school year.
What made you switch schools?
I switched for the Open program mostly because I went to Barton and Washburn was a lot different. It was just easier to be in another Open program.
What are the pros and cons of each school?
Well..I mean there’s no windows [at South] which is hard. At Washburn they had IB instead of AP which they have here. IB might’ve been better in Spanish classes because it started earlier. We had IB for Spanish 4, and I wasn’t going to try to get the IB medallion or diploma, that wasn’t important to me. I think the IB classes might’ve been better for junior and senior year for me…There’s a lot of different types of people and types of things we’re learning here at South. At Washburn, it was pretty much generic study things like reading Romeo and Juliet, [whereas] in Ms. Manor’s class reading about Dakota Reparations and things like that. I didn’t really know that when I switched but it’s important now that I’m here.
What are the differences between the learning environments at South and Washburn?
I think it’s more of an open classroom style [at South], at Washburn it would be just desks and rows, and here we have more tables and circle [tables]. I think that does make a difference when you’re sitting in class. It’s more discussion based instead of at Washburn it’s mostly the teacher talking and lecturing. [Although] it may not be that way for everyone.
South focuses a lot of social activism, is there an identifiable “focus” as Washburn?
Not really, the year I left that was when there was a lot of walkouts. I think that was when Washburn That was the only time I’ve heard of anything happening that was social justice. I know there’s a feminism club but that’s not as widespread as it is here.
How were the relationships between students and security guards different at each school?
At Washburn, there was very little security. I think there was one police officer and she was the only security that I saw when I was there. Nothing like it is here, it’s a lot different here with the security. You just show your ID instead of scanning it at [Washburn]. At South, there’s so much more security guards here, especially in the hallways, and they are way more enforcing than they were at Washburn.
What clubs and activities were people involved in that differed from South?
Everyone would have their different sports [at Washburn] and that was important. I didn’t really hear of any major clubs and things other than sports.The only other club that I had known of was the feminism club. Definitely South has a lot more clubs, [and] a wider variety of things to do other than just sports.

We interviewed Tacarrey Lee, a junior that has attended Patrick Henry his whole high school career.
Why did you chose to go to Henry?
Honestly, it was more of a district decision. Because it was closest to my house, they put me at Henry. It was easier because transportation-wise I can get here faster than other schools around the city.
What has the school taught you beyond school curriculum?
How to embrace myself. How to be me. Growing up going to school over South, it was always different because I was in a predominately Caucasian setting. I went to Lake Harriet, so I was basically with them all the time and I really changed myself to fit them. But then coming here, and being in a more predominately African American and Hmong society I really found myself as a person. And that helped me. Teachers saying “do you.”
Do you think a lot of students share that experience?
Yeah. I see a lot of kids growing up, they feeling enclosed, feeling nervous to be how they are. Even though sometimes who they are can be different to what we would expect, but it’s them. I believe Olsen, Nellie Stone, Anwatin. Schools on the Northside on the city feed in. Versus those who live around that area but still go to far schools. You have schools like Hmong Academy, which is technically over in Northwood, that [send students] here.
How would you describe the school in three words?
Expressive, Understanding and Knowledgable.
What are the best and worst parts of your school?
Best parts is that the teachers know what’s going on. They understand us students, as a culture. They know what us students do. They do understand that and they change their teaching styles to be able in incorporate that.
Can you give an example of that?
Like when it comes to math teachers, students don’t really like a whole bunch of numbers. Having, let’s say, a lot for African American boys that like sports, they’ll throw athletics into the picture. So that they understand the numbers through athletics and it means the same thing. They know how to change their teaching style to fit student’s personal and cultural needs.
A disadvantage? Mainly just some students who have the attitude that they don’t really care. And they bring they’re full life problems into the school and when they do that that’s what causes issues. That’s what causes the fights, that’s why we go on code yellow. Mainly the student’s attitudes. It’s not the staff. They do what they’re supposed to do.
Are there any issues that students here care about?
I would have to say the local events…I remember this year earlier they had a questionnaire about Jamar Clark before the whole case went down. They had a questionnaire in the auditorium about that. They did….a sit in for [Freddie Gray.] Then they had another thing this year about standardized test refusal. We have a group called the Movement who takes lead of that with help from the administration. We face different community problems.