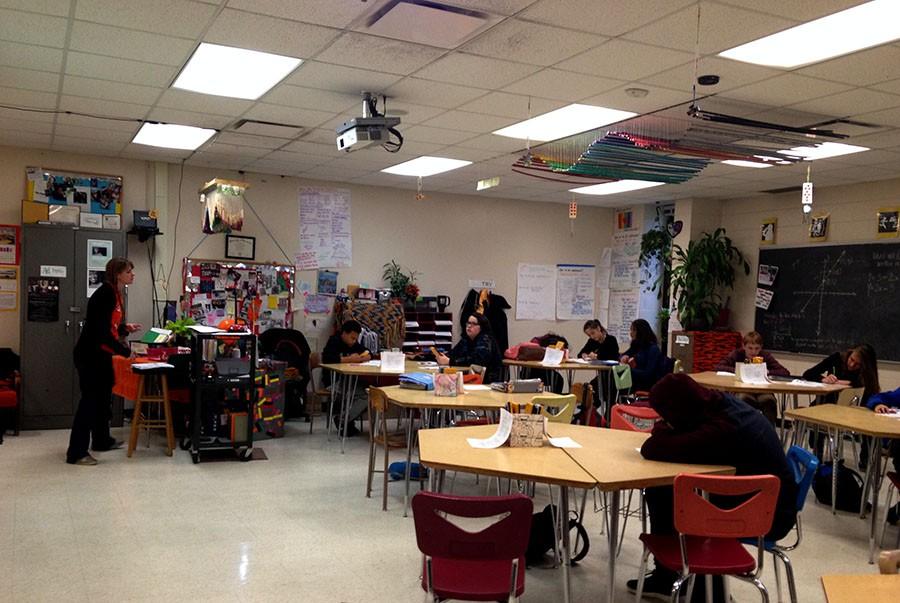 Math teachers and good friends Stephanie Woldum and Morgan Fierst have recently received confirmation that they are finalists for the presidential awards for excellence in mathematics and science teaching.

Woldum, who teaches intermediate algebra, recalls that she was hesitant at first to go through with the application process but then after a big shove from her mom and encouragement from other finalist Fierst, she decided to begin the strenuous process. “[I] went online and looked at the application process and its pretty extensive. You have to record a lesson and then you have to watch the lesson, which is hard to do,” she explained while laughing.

Recording the video gave the two teachers an opportunity to do some deep thinking about improvements that could be brought to their lessons.“ [You have to] reflect on it, and talk about areas of strength and areas that could be improved upon, but also talk about your instructional strategies and how student thinking is evident in the lesson that you chose,” described Woldum.

Fierst and Woldum were both hesitant at first but, after telling each other about their nominations, they decided they would go through their applications processes together.“Initially when I looked at the application, I wasn’t going to do it and then my mom bullied me into it so I actually ended up recording a lesson three days before it was due cause my mom was like ‘I am gonna be really mad at you if you don’t do it!’ so I was like ah geez fine, I will!” she mentioned jokingly.

Another key component in the application process was the letters of recommendation. Each applicant must have three, each from someone who can speak to their teaching and its effects. Fierst talks about her selective process for prospective writers of the required letters. “You can choose from a bunch of people, they for sure want a district official or an administrator of some sort or your principal. It could also be a district admin but it could be students, parents or colleagues,” she described.

Like the application process, the teaching itself is no easy job. Woldum creates her own worksheets and designs math related art projects all year. Fierst stays before and after school to offer help to her students, and she writes creative stories about parent functions to help students remember important equations. “[The award nomination] feels pretty good, I mean you put in a lot of work every single day, before school, after school, at home on the weekends, in a sense it validates the stuff you’re trying to do,” remarked Fierst.

Woldum also expresses an appreciation of being recognized. “For me it’s an honor of course, it’s also kind of re-engaged me in the types of lesson plans that I do, having worked in the Open program and working really hard to have a student centered experience and really giving ownership of learning to the students in the classroom,” Woldum enthused.

They are not the only ones who notice the work they put in though. Tova Breen, one of Woldum’s past students and Fierst’s current student expresses that before them, she felt frustrated with a lack of reasoning for learning some of techniques in math.

Looking back, Breen can recall that Woldum was her first math teacher who included real life situations in her class. “[Woldum] makes a lot of connections to real life situations, she tries to connect personally with students. Before I had her, I was like I will never use math and I don’t wanna be a mathematician, what’s the point of it. But, we did surveys about diversity in Minneapolis using math and that definitely got me more interested,” recalled Breen.

“[Fierst] is really creative, her stories are great. She wrote stories about all of the linear, quadratic, square root functions and everything, all the parent functions. She gave them goofy names so that we would remember them and honestly on the test, it definitely helped me. I still think of absolute value as Aby-solute value. She also has her linear line dance thing where for shift linear functions, she turned on music and had us do a shifting dance,” continued Breen.

Fierst’s unique stories and dances she creates for her students is appreciated, but her ability to open up and share small stories with her students make it easier to connect with her and reach out to her with questions. The most common stories she shares come from funny moments from her son.

The same could be said for Woldum who brings her two daughters in to help with the many art projects she builds into the intermediate algebra curriculums. “I don’t know I think they can be in some ways be seen as motherly figures, at least for me it helps me be like ‘oh, I can ask them questions and they’ll accept and will just listen to me and they’s not gonna be like oh Tova you’re so stupid why don’t you know this,” remarked Breen.

Breen went on to explain that Fierst’s relationship with her son allows her to connect more with her students. “I love when Ms. Fierst tells stories about her son all the time. Sometimes she connects it to math stuff, one day she was talking about her son was stressed out about first grade and she was like ‘and I just realized, you guys are probably so stressed out, I’m so sorry, we are just gonna take a breather’ and that’s just really nice that she a relationship with her son where it helps her understand us more,” emphasized Breen.

“It’s funny because every year I tell myself it’s gonna get easier because I put in so much work this year it’s gonna be easier next year, right? But it doesn’t change, there is still so many points and things you can change in your actual work cause I will tear up every lesson with comments from the previous year and looking at those like ‘man how can I do this?”  communicated Fierst.

The constant communication between Woldum and Fierst has been one of the many reasons so many of their lessons have been successful. “So much of who I am today as a teacher is related to the collaboration I’ve had with Ms. Fierst and learning things together and being able to travel on this journey of continuing to learn together has been a really positive thing in my life and I treasure that a lot,” expressed Woldum

Fierst and Woldum are unsure of when the final results will come in, however, winners or not, their continued collaboration and friendship are bound to benefit students for years to come.