Caffeine’s danger is underestimated among students 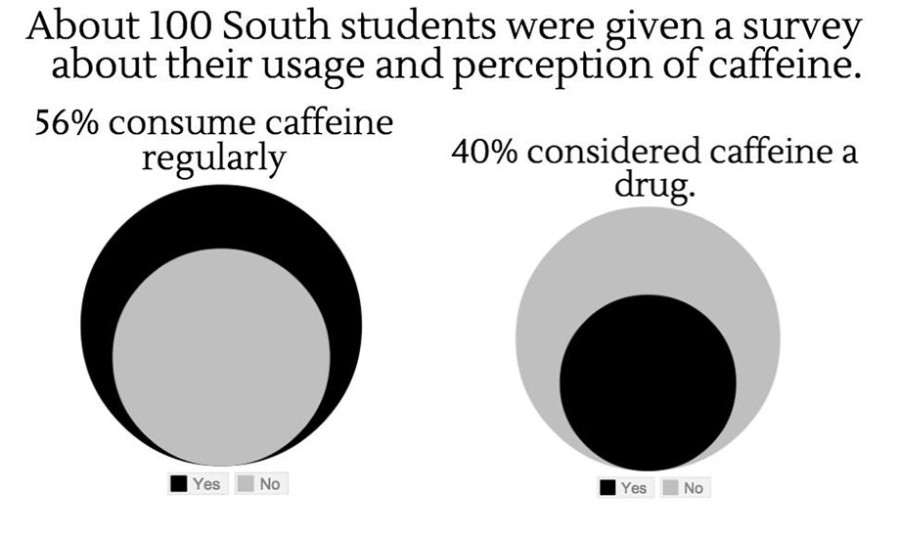 Students who are under a lot of stress when managing school and work are increasingly turning to caffeine as a way to staying awake and focused with little sleep.

Caffeine is the most commonly consumed drug in the world. According to a study by New Scientist magazine, about 90% of adults in the United states consume it on a daily basis.

High school and college students, especially, have increasingly used caffeine as an easy way of focusing. But caffeine’s addictive potential has long been overlooked due to it’s non-regulation, and may have health consequences.

In fact, a study performed in 1997 placed caffeine at 70 on a scale from 1 to 100 of addictiveness, towering above cannabis at 22 and just a touch below cocaine at 71. Additionally making caffeine a daily habit can increase tolerance.

“I don’t like coffee, but an energy drink in the morning is great. Some energy during 5th hour is great too because I’m crashing. The problem is that it makes you so much more tired.” said Adia Froehle-Baker, a sophomore.

Froehle-Baker continued, “You develop a dependency for it, and it’s kind of an expensive habit. [If] you just stop, you’re so tired, you just can’t function and you get headaches. You just can’t possibly do anything, like all you want to do is sleep. You get horrible caffeine headaches.”

“If I don’t drink it, my head hurts really bad,” said senior Eva Osthus. “I’ll just like feel really tired or like sort of hazy throughout the day.”

Energy drinks such as Monster Energy and Rockstar are also popular ways to power through a difficult night of work, but come with their own set of dangers. You can overdose on caffeine in as little as one and a half cans of Monster Energy.

Overdose symptoms include heart palpitations, where your heart beats too hard and may skip a beat or flutter, and profuse sweating. In even larger doses, caffeine may result in cardiac arrest or even death.

Death or serious bodily injury only occurs in the most extreme situations. However, the sheer availability of caffeine and easiness of overdosing raises eyebrows as to if we should consider it such a minor drug, or rather, if we should consider other less dangerous but illegal drugs so serious.

In a survey given to a portion of South students, 56% consumed caffeinated substances regularly, while only 40% considered caffeine a drug. Only 20% thought that caffeine was more dangerous than aspirin.

“I drink coffee every morning,” said Osthus. She continued, “It helps me function in general . . . one time, it was kind of weird, I drank a lot of coffee and then it had almost the same effect as if I wouldn’t have [drank] any at all but like a little worse. I was really out of it and jittery.”

Caffeine is a stimulant, like amphetamine (Adderall), methamphetamine, or MDMA (ecstasy), meaning it causes an increase in brain activity. Unlike these drugs, though, caffeine use is also associated with physical dependence.

To be physically dependent to a drug means you use it regularly, and if you stopped using it regularly, you would experience withdrawal symptoms.

A caffeine user who consumes as little as 100 milligrams (about 1 cup of coffee) a day can become physically dependant.

While caffeine withdrawal is very mild and manageable when compared to more powerful stimulants that cause physical dependence (such as cocaine), the fact that caffeine dependence and tolerance develops quickly is considered by many to be an issue.

A regular user may feel the need to increase their dose of caffeine to avoid withdrawal, which makes it much easier to overdose.

Whether for better or worse, responsible and irresponsible caffeine usage continues to be an integral part of student culture at South and in other high schools and colleges.

“It keeps me awake during class [and] I feel that’s positive,” said Froehle-Baker. “Because, I mean, if you’re falling asleep in class, you don’t really have a work ethic.”