Emerging inventors get their start at South 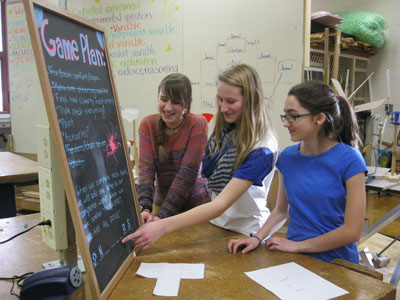 Freshmen Maya Simons, Megan Flora, and Emma Krasky work on their electric car to-do list at Sanford. The three of them, along with three other freshmen girls, started working on the car last year.

As global warming continues increase, students are inventing new and creative ways to decrease their carbon footprint. Several freshmen girls are in the process of building their own electric car. Odette James, Emma Krasky, Nailah Abdullah, Maya Simons, Meghan Flora and Liberty Nichols began the project last year at Sanford Middle School. The car seats three people. James described it as being most similar to a golf cart, so it is not technically street legal.

The group was inspired by a program called Bridging Engineering Science and Technology (BEST) where they first built a smaller version of an electric car. The next year they built a solar boat and finally decided to take on the huge project of building an electric car big enough to ride in.

Inventing is a constant process. Changes to the design are always taking place. Krasky described the design process, “We started by making drawings and then we started  writing down everything we needed to do, there were some bumps in the road.” Abdullah chimed in. “It’s almost never perfect, it’s always back and forth.”

The group received a lot of help from Project Lead the Way (PLTW) staff. They expressed that it helped them structure and gave them something to expand off of. Krasky talked about why this help was so important.

“It’s a lot different than are other projects where we kind of like took random things and just kind of put them together. This one we’re starting from scratch,” James noted. “It’s surprising how much support we’ve gotten. I mean people donated a motor for us, and wheels, and steering stuff. It’s nice to have that.”

Right now the electric car group is working on the final stages of production. They hope to finish their car soon and add final paint touches. The car is currently at Sanford but they hope to bring it to South when it’s done. They haven’t discussed patenting yet but added it could be an option in the future, although the design isn’t an entirely new invention.

The group of freshman girls are not the only ones inventing a new way to solve an old problem. “I’ve got so many ideas, like all of us do…” explained social studies teacher Doug Berglund. In his twenties Berglund invented a hand tool to help set up and tear down his drumkit. For legal reasons the Southerner may not disclose the tool’s specific use.

The tool is designed to help users get a better grip on the object they are fixing. In addition to setting and tearing down drum sets, Berglund’s tool can be used for plumbing and many other projects. Berglund “would have bought one thirty years ago if I could have, but they didn’t make them.”

Berglund and his brother created a jimmy-rigged tool by burning down and drilling a hole into a preexisting tool. According to Berglund, “I still use it to this day.” Toward the end of the 2012-2013 school year he created the new model using the 3D printer at South.

Junior Iain Knopp-Schwyn used a computer program to make a printable design of Berglund’s  invention. There is a printer at South that is able to create a 3D model of the tool, which Berglund was able to take to his attorney. It has also allowed him to make modifications and changes to the design before the manufacturers create the mold which will be used.

To take his invention to the next level Berglund decided to get a patent. A patent is a legal document that protects someone’s invention from being copied by other individuals. It safeguards an individual’s design and product. It allows inventors to keep other people from “making, using, offering for sale, or selling the invention.” There are three types of patents: a utility patent, a design patent, and plant patents.

“We gave [the lawyers] the drawings [of the design],” explained Berglund, “they had us draw all kinds of openings on it just incase someone else came in with… an oval opening, they get away with it,” he continued. His lawyers were able to provide guidance to help Berglund invent the best tool for a patent.

In December 2013, Berglund officially got his provisional patent. From that time he has one year to “get all his ducks in a row, make any changes, line up manufacturers.” Part of the process required Knopp-Schwyn to sign off, waiving his right to sell this design to anyone else or even talk about it. He is allowed to keep a copy of the original program and one print-out for his own records.

Berglund already has a few changes in mind for the final patent. He is hoping to have a few musicians try it out over the summer as well. Berglund got lined up with a manufacturer who will be create the official tools.

Berglund is considering incorporating and becoming a business. He has been able to take advantage of his resources at South by working with talented students with more experience such as Knopp-Schwyn who works with computer programing, or have incorporated.

“I’m willing to spend whatever thousands I have to to try this,” Berglund said. “At the very, very least I’ll have a bushel full of these good tools I’ll give away as Christmas gifts.”