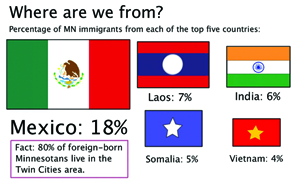 “I could tell it was difficult although I was very young,” said senior Abdirashid Hassan, reflecting on his experience coming to the US. Hassan immigrated to Minneapolis from Somalia under refugee status when he was four.

Minneapolis is called home by a wide range of peoples from many different backgrounds, we are a hub for immigration especially for the Hmong, Somali, and Latino populations.

The Twin Cities are a base for many relocation and refugee programs, and Minnesota is a place specifically named as a relocation state.

“The Somali community, we are forced to immigrate because of the war,” said Hassan. A cold war has been fought in Somalia since the country gained independence in 1960. “My parents stayed there and gave birth to me. After a while, my dad and brother got killed, so we decided to move. I was a little kid, I was like four years old.”

Minneapolis has the highest number of Somalis in the US. Many Somali families come to Minnesota under refugee status. A refugee is defined by the United Nations as “anyone forced to flee their home country due to a well-founded fear of persecution because of: race, religion, nationality, social group membership, political opinion.”

Although most of the American population are immigrants, there are an increasing number of walls and hurdles new immigrants must break to become citizens of the United States. If someone is not born in the US, or their family members are not already citizens, to get a Visa and become a citizen is difficult. These include applying for naturalization, which you may only apply for if you have been living here for more than 5 years, and pass the naturalization test, which includes an English language proficiency test and a Civics test.

“My dad was working with the oil refinery back home.” To Quevedo, back home is Venezuela.

“Then the new president came into power. My dad voted for him the first time around and the second time my dad didn’t vote for him, so him, along with, like, 2500 people, got laid off.” Quevedo described his father beginning to work for a group which protested the government.

“My dad was running a risk, he became part of this group that lead marches and protests against the government. He wasn’t the head of that but he was pretty well known, and there was a death threat against those people. So he filed for political asylum, he got it. I had a passport and a Visa, but my little brother didn’t.”

Quevedo’s family had to sell their cars and house, and he and his brother sold cheese for two years to get enough money for a Visa for his brother.

“My mom went to the US but they sent her back because my dad was here, and they [the US] are worried people with families will not come. We lived with my grandma, and my mom had to work all day, but then we came here and got reunited back with my pops.”

Minnesota has passed the DREAM Act, which provides instate tuition and financial aid to undocumented students who have been involved in the Minnesota school system or Selective Service, and have applied for lawful immigration status. This is a huge step towards helping undocumented immigrants in Minnesota.

Senior Fatuma Abdi pointed out that many people lie about their age, identity, almost anything to get into schools and to make it through policies.

“Basically this society makes it hard for people who have immigrated to get the same rights as citizens do, what are just the policies,” Abdi stated.

She spoke specifically to people from East African community immigrating to Minnesota. “People come to this country for the ‘American Dream.’ They want to have a better life, they want their children to have a better education than they did, and to have different opportunities,” said Abdi. “They lie about their age they lie about the little things”

“People from East Africa come from camps, so they come to America and they will  lie about anything to get into the education system, to get into any system,” Abdi continued, “and I don’t think we should punish them for it. I think they should lie because it helps them, what’s two or three years when it means freedom and an education?”