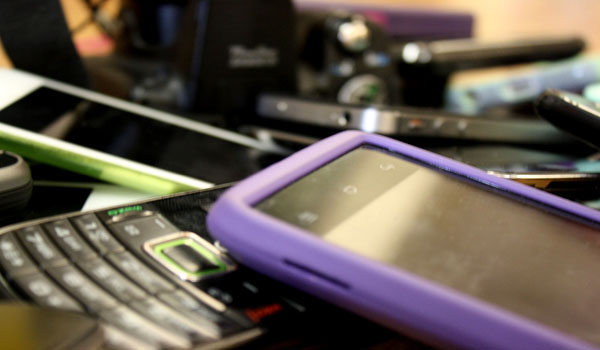 One of the reasons for increased electronics theft is students' habit of leaving phones out while in class.

“I followed a girl in the hall during school, before lunch. I followed her to see wherever she went… seeing what she would do.” Tyler (not his real name), a junior, stole his first phone when he was a freshman. “It was in her side pocket,” he said. Since then, Tyler stole 30 to 50 phones. “I don’t do it anymore,” he added. “I don’t really need the money.”

Electronics theft, especially that of cell phones, has become an epidemic at South High. With the higher accessibility of expensive and portable phones, tablets, and music players comes the ability to take them with greater ease. Students storing them in back pockets, backpack pockets and leaving them out to charge in a classroom leaves expensive devices vulnerable to theft.

“Imagine working in a job for a month, making the same amount of money as having a kid walk with a phone in their pocket and being able to take it,” Tyler explained of his reasons for stealing. Taking others’ portable electronic devices is an incredibly easy way to make money.  “A nice phone, you could get up to $500,” added Tyler. He and many others utilize websites like Craigslist to illegally sell stolen phones. Many advertisements promote wiping a phone’s electronic serial number (ESN), therefore removing it from phone carriers’ lists of stolen phones, making it easier to sell.

Another very easy way to get rid of a phone and make fast money is using one of the many ecoATM kiosks spread about the metro area’s malls. The process of using an ecoATM is described on the company’s website: “Sell your phone or other device by placing it in the ecoATM kiosk, and we’ll tell you how much it’s worth. What happens next? You get instant cash.” For an iPhone 5, one could earn up to $300, according to the website.

Phones and other devices are stolen often because they are left alone or unsupervised. Deb Snell, media specialist, has observed neglectful care of electronics firsthand. “I see students put their phone in the corner to charge and sit at a computer and thinking they’re going to watch it,” and when she picks up the phone to inquire of its owner, “they don’t even see me standing there holding their phone,” she noted.

Constant attention is required to prevent theft. If a student leaves their phone on a table or desk, it is very easy to take undetected. Freshman Huda Gelle had her cell phone stolen in this way. “I left it on the desk, and I came back and it wasn’t there,” she said. To keep a phone or other device safe, it should be kept close to the body while not in use. Putting a phone in your front pocket rather than the back, for example, makes it more difficult to be grabbed without being noticed.

“You can usually like spot people that would be easy, most kids just put their stuff in their side pockets, and they’re not aware of their surroundings,” Tyler explained. He mostly took phones from people’s pockets.

As expensive phones become more available than ever, getting one stolen means a large financial loss. “I had to spend $600, and bought a prepaid phone for the 6 months i didn’t have the other phone,” reported Whiten. “I bought my phone myself, my mom didn’t buy it. I had to work hard for my money to get that phone.” It’s difficult enough to save up for a $500 smartphone, let alone have to buy another one, even with a steady job.

Students often lose not only money from having a device stolen, but also things like photos or videos that are of sentimental value. Larry Whiten, a sophomore, had his iPhone 5 stolen twice last year. “The main thing was on the camera of the iPhone 5 were pictures of my newborn nephew. They were the only pictures of him for his first couple of days after being born, because no-one else had a camera. I didn’t have them backed up on the cloud.”

However, it’s not only students’ phones or other devices that have been taken. The media center often has iPads or other electronics stolen from carts lent to teachers. Tanya Hodge, an English teacher, had an iPad mini taken from her cart while it was being lent to another teacher. “I think technology can have an impact on education, but also transform my curriculum. As a teacher, it’s not just some glossy little fun thing… I really think it could have a transformative effect,” Hodge explained. When there are less devices available for student use, it affects learning. “It’s students stealing from themselves… it has an impact on your peers,” said Hodge.

The school can’t always replace stolen items, either. “When items are destroyed or stolen they are not always replaced by the district,” added Snell.  “The district feels it’s the responsibility of the school to replace them, but the school doesn’t always have the money to replace [the stolen items],” she continued. Therefore, if a teacher has the same amount of ipads as students and loses one, the class will not have enough to go around.

Stealing electronics has become a widespread problem at South. Students and teachers alike suffer its consequences, financially and otherwise, making an enormous impact. The general consensus, it seems, is that theft needs to stop. Students can also join the effort to reduce theft. “We live in a community,” said Snell. “I would recommend that if you see a theft occurring do what you can to bring it to a teachers attention, or the deans. Let someone know.”