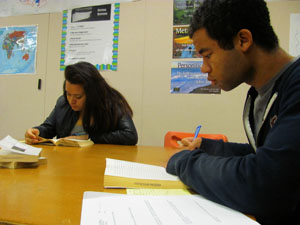 Behind the welcome desk at the entrance of South, a short hallway leads to two classrooms.  Many South students can’t accurately describe the Partnership classes within this hall, despite the record 152 students that are taking at least one of the offered classes.

The explanation that Marcia Sutherland, the teacher of the Partnership English classes, provides to those interested is that “it’s an opportunity for students that are behind in credits in English and Social Studies to turn things around and get caught up, while they stay at South.”  The program, which has been at South since 1978, is the opportunity that many students need to get to graduation without leaving for an alternative school.

Those involved with the program view it as a huge benefit to the school, and a definite success.  Sheri Harris, the social worker for Partnership classes, estimated that they see 10% of the student body.  “We help students stay at South.  We keep students at South, we help students feel better about what they’re doing,” Harris says.   Senior Amira Elhurabi credits a lot of her success to her involvement in the program, and sees her future without it as very different.  “I really would fail. It’s so much easier to just have a class and have something to do on top of it in school, instead of having to go after school and stuff.  It’s such a good program, I love it,” Elhurabi says.
As a program that helps keep South students at school, Partnership is also helping senior Kevin Wicklund get to graduation.  He says that without Partnership, “ it would’ve been harder, because I have a job after school, and I’d have to do all the credit make up after school.”
Unlike some misconceptions, the Partnership program is not an entirely separate program, but currently offers only English and Social Studies classes that become one of the six regular classes in the school day.  Harris explains that it’s offered as “one of the Social Studies and English options in the building, for example, instead of college prep writing, you take Partnership English.”
Additionally, the rigorous academic standards required to catch up on credits eliminates any ideas that “Partnership’s for dummies, and that the curriculum’s dumbed down,” according to Harris, adding that this thought  “is just not accurate.”

To actually earn a second credit in the class, a student must be earning a C or higher, and have 80% attendance. When these criteria are met, students can approach the teacher about taking on contract work, similar to an independent study.

“Those are all outside of regular class, they have to still keep up their regular class, but then do that contract,” Sutherland explains. “It’s a little like doing an independent study, only I decide what it is.”

Elhurabi views the work as more challenging than some of her other classes, and uses a different set of skills for it.  “You have to do so much work on your own,” she explains.  “It does help you use your time wisely, and in college you’re going to have to know how to use your time wisely.”

Partnership supports an immense part of South’s population.  In fact, the current program size of 152 students is the largest in its history.  And out of these large classes, Harris estimates that “probably 80% of seniors graduated on time, probably 95% by the end of the summer.”

The program has proved itself to be an important feature of South for many students. “It’s valuable, it gives people the opportunity to learn from their mistakes, and also to make up their mistakes,” says Wicklund.

The support being provided to the South community in Partnership is unique, and, according to Sutherland, really important.

“We want everybody to get involved some way, and you need to have a feeling of community. People need to feel like they belong and that they’re important.  We spend so much time going from class to class, sitting down, you need a little bit of time to just connect,” Sutherland says.

Partnership works to create a community that has a strong focus on graduation.  Harris noted that the program “is a little more focused and intentional to get students to graduation.”  What is amazing to Sutherland is the graduation itself. “Every year there’s some kid who says, ‘I’m the first one in my family to graduate,’ or ‘I’m the first one to graduate in four years,’” Sutherland describes. “And they’re so proud, and their family’s so proud.”

The common goal of graduation helps bring together the students in Partnership classes. “We all know we’re there for a common goal, to graduate, so in a way we’re unified,” says Wicklund.  “We’re all trying to do better things.”

With a large number of students at South graduating due to their involvement in the program, it is difficult to understand why many students don’t have a good understanding of it.  In Sutherland’s opinion, much of the reason Partnership is under the radar is due to South’s busy student body. “There are so many resources at South that for kids, if they learn about this for the first time, they might ask themselves, ‘What else do I need that I don’t know we have?’” Sutherland says.  With so many programs and resources, South students may not have been exposed to Partnership in particular.

Many South students have no second thoughts about graduating, but to Sutherland and the community in Partnership, graduation is a big part of what defines the program.  “Graduation’s just a trip,” Sutherland gushes, “because you see all these parents and they’re so proud, and the kids are so proud.  It is still a big deal to graduate high school.  Some of us take that for granted.”