What were we expecting? 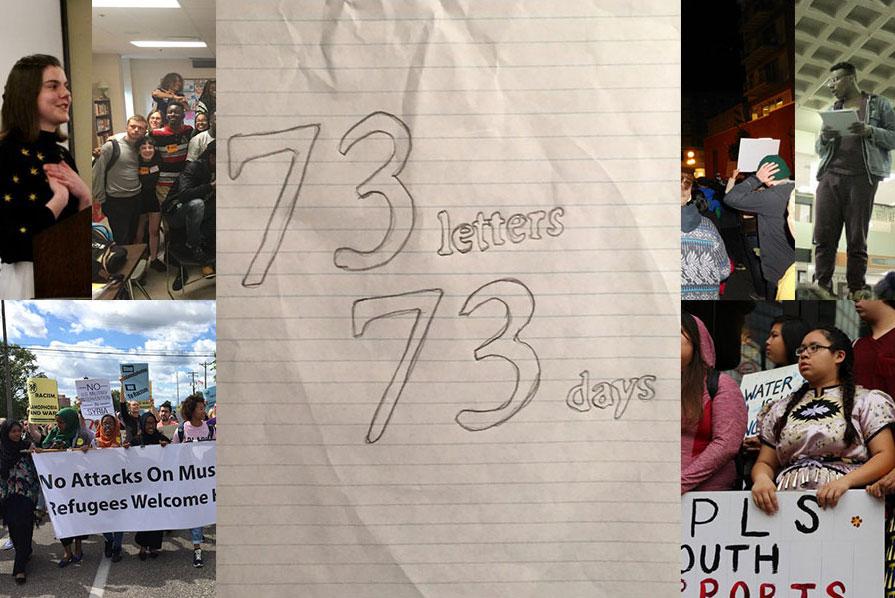 People shame their fellow neighbors for voting third party when they themselves voted for Clinton as opposed to Sanders in the Democratic Primaries. At this point I have lost all faith in the Democratic party and the values it “stands” for coming out of this election with the absurd reaction that its members have beset upon our country.

Their ideals are so convoluted and contradictory now that I can hardly take their platform seriously with them preaching equality and “safe spaces” and then turning around and wishing for our president elect and his supporters to be shot. They say Trump is a symbol of hate but then they go and wish death on people who voted for him or anyone who “wasn’t with Her.” Democrats are in no position to rip on third party voters or even voters in general. This is a country where we have the constitutional right to make our own decision and decide for ourselves who we will vote for. To say that anyone who doesn’t vote for your candidate is an awful person makes you look foolish. Opinions are subjective and nobody’s views are better than anyone else’s, they are just different.

Democrats are in no position to disparage third party voters particularly though. The argument is often made that by not voting Clinton you actively voted Trump and essentially caused his election. This is hypocritical to the utmost degree because Democrats were the people ignorant and negligent enough to vote Clinton in as our Democratic nominee rather than Sanders even though it was crystal clear that Sanders would beat Trump by double digits whereas Clinton would cut it very close. With this knowledge at hand it makes the logical option for electing a candidate best equipped to beat Trump being Bernie Sanders by a mile. I don’t get why people expected the country to overwhelmingly vote for her, she had a 54.2% unfavorability rating that was determined over widespread polls by multiple media agencies, uncomfortably close to Trump’s 56%. Whereas Sanders only held a 30% disapproval.

Instead though, you Clinton supporters doubled down with a corrupt multi-faced politician and prayed that somehow you would avoid the crash from the careening car that you just sent over the bridge that was your one path to winning the election. In fact you could see Sanders being the best candidate for beating Trump from a mile away. All the way back in December of 2015, almost a year ago Sanders was leading Trump by 13 points as opposed to Clinton’s meager 6 according to to a Quinnipiac University poll. This trend was consistently seen all throughout the months leading up to the election, January 21st Sanders was leading Trump by 23 points and Clinton struggled with a lead of only 9 points. In February Clinton was barely holding on with only a single point above Trump. April 14th Fox concluded that Sanders would beat Trump by 14 points and Clinton would win by 7. In May it was recorded by NBC that Sanders led by 13 points and Clinton by only 5. But no, Logic and Reason went flying out the front door, already on the next flight to Canada because unlike the rest of America they already knew the outcome of the election.

So the DNC and Democrats grinded their teeth and actively tried to suffocate the growing revolution that Bernie created. They pushed for Clinton to the point where they limited polling locations, like in Rhode Island; (a state leaning Sanders) so that Sanders supporters would have less voice and power to choose their own candidate. They intentionally supported Clinton even before the voting booths opened and only now that Trump is elected people are complaining that the system is rigged/broken.

Clinton was just your run of the mill politician, being funded by massive corporations so that she could protect their interests in office and the DNC also being funded by these corporations was financially obligated to be biased towards a Clinton victory over Sanders. Once Sanders conceded people were surprised and aghast that only some of his supporters went over to Clinton to buy back into the system. Maybe if Clinton was going to advocate and support these voters that didn’t hop on her campaign we would be singing a different song today, but they didn’t buy into the idea that a party or candidate deserves your vote, Clinton struggled with earning people’s votes. I don’t know how anyone is surprised by that, especially due to often sudden and dramatic change in political opinions throughout her career with her changing views on things such as gay marriage and the war with Iraq. Democrats who blame their poor voting choices on third party voters are “pots calling the kettles black” because they really did the same exact thing by supporting Clinton over Sanders.

Adding on to the immense landfill of hypocrisy that the Democratic party rests their crumbling empire upon is the sudden realization that the system is broken as soon as the system isn’t working in their favor. The system is broken now yes, but it was also broken before. Just take a look at the Bush-Gore election of 2000 where the presidency of the U.S. was essentially up to 2,000 Floridian residents. Or take a look at your own party where the DNC says screw all to the idea of equality and impartiality and actively pushes for a Clinton-Trump election. Or take a glance at your party and the immense amounts of money they are happily grabbing from the multibillion dollar corporations. “But oh wait suddenly the broken system doesn’t work to my favor even though I am responsible for all the problems I’m having, let’s go protest the broken system.” The mentality of not doing anything about a problem until it is directly affecting you has a striking similarity to the U.S.’ interactions in WW II and the reason we keep seeing problems with equality today.

A major reason these protests have popped up is that the “broken system” has started to be exploited by people other than yourselves and you feel entitled to have all the exploiting to yourself. To complain about the system being broken when you also didn’t choose the candidate most fit to avoiding your current problems is ridiculous. “Hmm I wonder why,” maybe could it be because Sanders was set on fixing it? “Wait could that be the reason why Democrats and the DNC were so determined to make sure Sanders was not our nominee, because he was going to patch something you have been exploiting again and again? I wonder…”

I think that the whole #notmypresident ideology is completely and systematically flawed. I get it, Trump is a buffoon and you don’t want to be represented by him, but to say that he isn’t your president is opening Pandora’s box. By refusing to accept him as your future president you are opposing the idea of a democracy whether you like it or not. The non acceptance of Trump has serious implications and is not to be taken lightly. Suddenly now you are opposing a system that has been fine for you in every election before this one. This is only because you are not happy with the outcome. In a democracy, (we live in one remember?) you have to live with the fact that your candidate of choice won’t always win.

Losing just like winning is an essential part of the game we all play. In life you aren’t going to win every battle you encounter and to cry about losing is a behavior typically associated with egotistic preschoolers. Have some integrity. You can’t just have a “get out of the system free” card to use at your disposal whenever you so choose when you don’t get your way and whether you like it or not he is and he will be your president for as long as he holds office. If you would rather skip out on democracies as a whole which would you rather pick, a dictatorship or an anarchy because currently those are your only real other choices. You don’t have a case if you only “oppose” the system if it is not benefiting you.

A lot of people complain about millennials being Clinton’s downfall. Well if you would have taken a glance at the polls because clearly you didn’t, young people overwhelmingly supported Sanders. What did you expect by not choosing him as your candidate? Voters don’t just mindlessly hop from candidate to candidate just because one endorses the other. Clinton didn’t earn the millennials vote and that is on her, not us.

With these occurrences it is no wonder that third party voting is becoming more and more popular every election. And a third party vote is not a wasted vote, if a third party receives 5% of the overall vote then they are eligible for a grant of around 20,000,000 dollars from the FEC to help fund their campaign for the next election.

In the end it’s true that the system is broken and needs to be fixed, but the reasoning of why people are protesting the system is extremely flawed. Ironically in fact, third party voting would be the easiest and simplest way to drastically change the system and to work towards fixing it. It would break the electoral college so hard that it would be impossible to continue as a country without implementing a new way for determining the presidency of our country. And with 40% of the population right now having an open mind and considering voting third party, who knows, we may see these changes come around in the near future.

In the end I would encourage the practice of tolerance for all people, regardless of their voting decisions. I would hope that you show respect towards your fellow citizens for making their own decisions. Maybe even a little appreciation towards third party voters because they truly are the ones who are going to cause the change we all so desperately wish to see in this country.