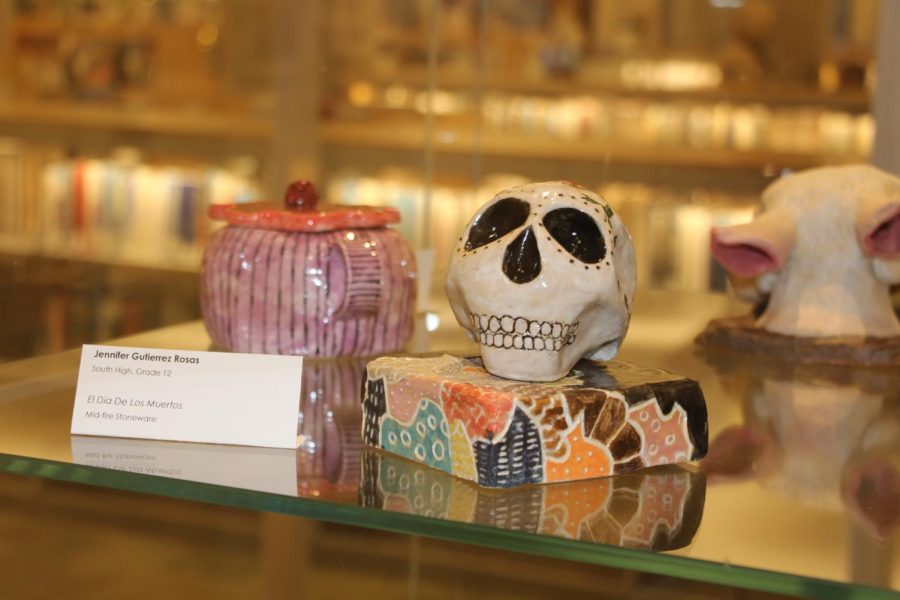 This is El Día De Los Muertos, a mid-fire stoneware sculpture by Jennifer Gutierrez Rosas, and a part of the Viva City Fine Arts Festival. Viva City features the arts programs of MPS high schools and gives students an opportunity to show their work to a larger audience.

Viva City Fine Arts Festival showcases the work of the arts programs and student artists in Minneapolis Public Schools. In its 26th year, Viva City is an outcome of the partnership with MPS, the Guthrie Theater, local artists, and various art organizations. This year’s art exhibit is located at the Minneapolis Central Library from February 5th through March 30th. There was also an exhibit at the Guthrie to showcase other fine arts such as dance and music.

High schools throughout the district are participating in Viva City, but South has the largest number of students. All types of visual media are shown there, from pencil drawings and photographs, to mid-fire stoneware, sculptures, and portraits.

Shadrak Amedzonekou, a freshman at South, has been taking photographs for four years. He enjoys walking until he finds a person, place, or object that he wants to photograph. He said that he likes to mostly capture portraits and flowers. He decided to take this photograph, Creepy Building, because it looked mysterious and intriguing. In it, a side angle of a seemingly uninhabited building is juxtaposed with a bright morning sky that provides an interesting contrast.

His artist statement notes, “But no matter what I shoot I will always love Photography.” He used his opportunity at Viva City to share his work with others, “Well that’s cool that I was able to get it out. Outside of like just my phone.” Amedzonekou added that he would enjoy getting a photography job. “My goal is to get somewhere with photography.”

Brandon Alarcon, a senior, is working on incorporating perspectives into his art using acrylics and charcoal. He is trying to find new ways to show creative perspectives on issues such as disease and mental health through his visual art. Self-described as a psychological portrait, in Alarcon’s drawing, The Yellow Face, he rearranges his facial features to represent perceiving different perspectives, set against an agressively yellow background.

Alarcon gets a lot of his ideas from life and the environment around him, “Let’s say I’m on a train and I see something happen could just write it down in my notes. Inspiration can come from anywhere.” He said that being a part of the exhibition, “inspires me to push to make better art.” He was surprised when he was nominated, but he thinks that a lot of the artists at South have grown very quickly. “I didn’t really think I would be nominated because I haven’t been too confident with my art… It’s honestly inspiring for everybody just to see each other grow.”

Gus Dittmann too finds support in the art programs at South. He feels that the art department and teachers have helped him develop his skills. “All the teachers are really helpful, and encouraging and help me come up with ideas and stuff and there’s a lot of options for different types of art classes.” Dittman expresses himself by drawing things that he connects with including the various objects in exhibited work Still Life in Graphite. The black and white drawing uses shading to dramatically show a hat and bottle, on top of a white cloth. He mostly makes pencil drawings, and sometimes finishes them with marker.

David Olson, the ceramics teacher, described the benefits of Viva City. “It recognizes their achievement in a very real way, that’s not in the school. it’s outside of the school; it’s in a public gallery.” Another advantage of the showcase is that students can put it on their official exhibition record, on a resume for college, or use it when applying for grants, internships, and scholarships.

Krista Bobolink, a sophomore, agrees with Olson. “It makes me feel proud that somebody’s seen my work as good enough.” She said that she hadn’t planned for other people to really see her work, and initially she’d just turned it in for a grade. She described her submission as “a photograph of my brother in his Native American regalia.” Full of color, her photograph, Regalia, easily draws the eye while telling a story.

Each art teacher in the district can choose three 2-D entries and four 3-D entries to submit. Olson generally tries to choose seniors’ work and a variety of styles for his submissions.

Art students have several other opportunities to exhibit their art, including showing at the annual Spring Art Show (first two weeks of May) at Modus Locus. “All the art classes at South make this big art show in this professional gallery. So that’s also a really official, outside the school event,” said Olson.

Students also have an opportunity to exhibit their work at the Christensen Center through a partnership with Augsburg University. Curated by the Augsburg faculty, the show is entering its third year and features all visual art. Running from the end of May through August, Olson said it has a very professional presentation. The curators often choose the art for the show from the Spring Art Festival.

Viva City allows students’ art to make a difference in their community, not just as an exhibition. In addition the ceramics classes also participate in Powderhorn Empty Bowls fundraiser. “We make bowls, student work. We contribute the bowls. People take the bowls home. It’s another type of place to give artwork out in the community where it has a real meaning and makes a difference,” said Olson.