VOICES at South: Who is being heard? 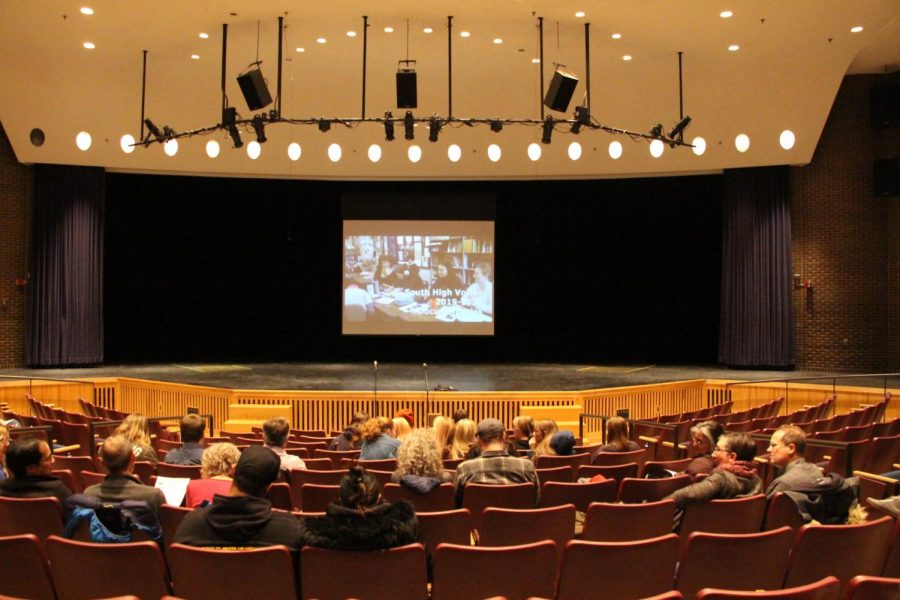 Members of the South community watch films created by the VOICES class. VOICES is a semester-long, media-based course for seniors at South, and is currently taught by teachers Delainia Haug and Laura Lanik. Haug, the person who conceived of the course, described its purpose as “[giving] seniors an opportunity to express their own passions around social justice topics through digital media production.”

Walking into the auditorium for the VOICES film screening on January 23rd, there was evident excitement radiating off of students and community members alike. Once the lights dimmed and the films commenced, the audience was engulfed in the world of each individual project. For the hour and some change that the nine films played, topics ranging from the foster care system to South’s lack of Black and Brown teachers were delved into.

Following the screening, the VOICES students participated in a Q&A about whatever the audience was interested in knowing about. One of the topics that the room was most interested in was the students’ experiences making their films and taking the course itself. Although they did a fantastic job of responding to the impromptu questions that night, there was much more information about the VOICES course that could be dissected, such as the purpose of the VOICES course and what students feel like they have gained from it. What did the preparation for this film festival look like behind the scenes? How did the students truly feel about the course?

VOICES is a semester-long, media-based course for seniors at South, and is currently taught by teachers Delainia Haug and Laura Lanik. Haug, the person who conceived of the course, described its purpose as “[giving] seniors an opportunity to express their own passions around social justice topics through digital media production.”

The three main productions of the semester-long course focus on photography, podcasting, and a documentary film, respectively, with the first two projects preparing students for the documentary. “The idea is for students to… make the message and decide what they want the world to hear about,” said Haug.

Although many students have enjoyed the freedom and lack of structure of the VOICES course, senior Simon Baker expressed how that style was incompatible with how they learn. “Our group came into this documentary knowing nothing,” they said. They were simply given equipment and told to make a film. However, this sort of dilemma is almost an inevitability when there are people of different learning styles who take the same course.

With their film Foster Care System Malfunction, Hailey Yellow, Simon Baker, and Annie Oace wished “to bring more awareness [to the foster care system], because the system is messed up in many ways, there’s too many flaws…a lot of people are [not aware], especially the people that run [the system],” according to Yellow.

When asked about the process of making their film, Oace stated that their work “…started as research…” and Baker added that “everything [took] so long and we had so many setbacks for our group…that shifted our [process].”  Despite the complications that their group faced, Yellow was happy with the film in the end. “We thought it was fun, and we really liked how it turned out and thought it was worth it,” they said.

The goal of their project was to “get into the point that this is a continuation of slavery…it just has a different name…[and that] we need to [stop] locking people up, we need to be treating people [and giving people resources].”

When turning to their experience in the VOICES course overall, they noted that, “start[ing] with podcasts…[helped them get] a bit of insight in how to interview people [and] when [they] went into the documentaries it was good to have the school help.”

On the other hand, they said that there were still so many restrictions with the project. “The groups that were really striving were those who had…their own equipment at home,” they said. Many groups did not have those luxuries and felt they faced more difficulties during the production stage of their documentaries. The equipment dimension of the various media projects was one of concern, due to how easily that can become unfair as wealthier students tend to have more access to expensive equipment, whereas working class students don’t frequently have that same privilege.

Haug noted, however, several measures taken to prevent this inequality. “[We] provide the same exact equipment for every group of students…some students have fancier equipment, [but] that doesn’t mean they make a better film…The project isn’t about [optics], it’s about using your voice to create a message that’s meaningful and will change the world,” they said.

Additionally, the composure of this year’s VOICES course was another area of trouble, being that it was majority white students despite the fact that South is not a majority white school. When inquiring about this reality, Haug explained some of the facts that might have led to this. “The class is open to all students…sometimes the reason people can’t take the class…[is that] if they don’t have space in their schedule it limits them…this year was kind of an anomaly…Normally the class is not majority white.”

Thus, this year’s VOICES course was not as necessarily in line with what it aspires to be, and Haug along with many other key actors and proponents of the course hope to bring about change so that the course reapproaches its original purpose. One of the ways that they are currently working to do so is through “recruit[ing] students who [they] think would be good for the class…[as] the whole point of the class is it’s for kids who feel like school [is meaningless] and trying to hook those kids in and make it meaningful.”