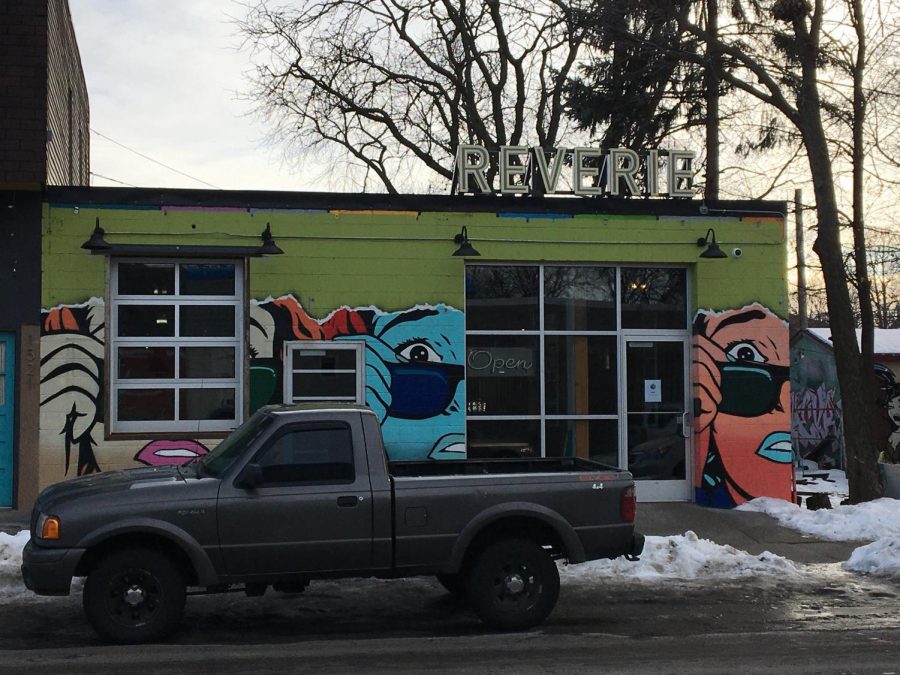 Reverie is a new Vegan restaurant that opened this winter in the Powderhorn neighborhood. The food is reasonably affordable and tasty whether or not you're vegan, and the aesthetic of the restaurant provides a nice atmosphere.

Reverie is a new Vegan restaurant that opened in the Powderhorn neighborhood in December. Located at 1517 East 35th St, they are open daily, and commit themselves to making plant-based food from scratch, including but not limited to; Smoked Potato salad, a KBLT, and Cashew Cheesecake. I was very new to the Vegan scene, and had never had a properly prepared vegan meal. I was very excited to try it out, going in with an open mind, and a large appetite.

My first impressions of the restaurant were that it was just another restaurant on a busy street, until I stepped inside. It was very sleek and modern with amazing blue murals of plant life on the inside walls. I was surprised by just how nice and clean everything was. It was the perfect blend of hippie and sophistication. I walked up to the counter and was greeted by a friendly staff, who were very assistive in helping me place my order. For the order itself, I ordered an oat milk cappuccino, a smoked potato salad, tofu tacos with avocado, and their seasonal maple ginger cashew cheesecake.

I received the oat milk cappuccino first, and I have nothing but positive things to say about it. The oat milk was very high quality and tasted amazing, probably even better than 2% dairy milk. As for the espresso, I’m not really sure what good espresso is supposed to taste like, but I liked it nonetheless. Next up was the smoked potato salad. It looked very similar to coleslaw, but unlike it’s visually related mayo salad, it actually tasted like something I would like to eat. The potatoes were done nicely, but I found the sauce to be lacking in a variety of flavors.

Next up were the tofu tacos with salad. This was my first time trying tofu, and it tasted amazing. It was fried, with all of the flavors, crunch, and oil really coming through. The corn tortillas were good, however the acidity and vinegar in the salad dressing were very overpowering. The tacos’ flavors complimented each other very nicely, with the avocado beautifully pulling all of them together, and combating the acidity. However, if you manage to catch a bite without the avocado, the same issue of the overwhelming vinegary dressing arises. For my first vegan taco experience, I would have to say it was pretty good.

Finally, was the cheesecake. Honestly it was the best part of the meal. It was a little steep; being $6 for a tiny portion of cheesecake, but it makes up for it in the flavor. The cheese filling was very creamy, and I couldn’t even tell it was made out of cashews. The base of the dessert was amazing, made with walnuts, maple syrup, and ginger. It was definitely a very good way to end my experience at the restaurant, and the next time I’m hungry and in the area, I will definitely come back for that cheesecake.

In conclusion, Reverie is slightly above average in the food department, which is probably extremely good for people who can’t eat animal products, and definitely very above average in the aesthetics department. I would definitely recommend this place if you’re ever around the Powderhorn neighborhood, especially if you have certain dietary restrictions. The order total came to a little under $30 excluding the tip, which isn’t terrible, but is a little pricey. In addition, I would like to note that other menu items may be better or worse than the ones that I selected, and it’s all based on personal preference. The bathrooms were very clean, organized, and spacious with compostable brown paper towels. The water quality is amazing, and doesn’t have a horrible after taste like most other restaurants do. All in all, a good restaurant, good food, and a better atmosphere.