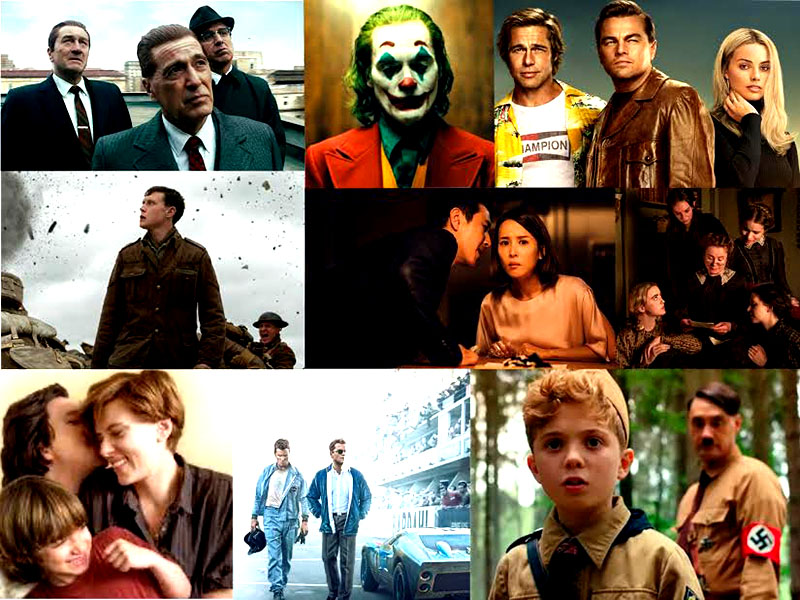 These are the nine films nominated for best picture. The variety this year is more than that of years past.

“Marriage Story”: This film is a complex look at a relationship where the two people want to maintain their family, but feel as though they can not coexist in a marriage. This movie explores beautiful performances by Adam Driver and Scarlett Johansson. The chemistry between the two is great, but the supporting performances also make this movie what it is. Laura Dern and Ray Liotta play two sides of the same coin with their lawyer performances representing the actor the same gender as them. This is truly a film rooted in dialogue, from the seemingly insignificant jests at each other that play a role in the divorce trial later to the explosive tantrums between the two people pushed over the edge. This film also explores how the two get pushed to the edge, not by each other, but by their conniving lawyers trying to one up each other, tearing the relationship to shreds in the process. Most of the married adults I have talked to about this movie say it’s phenomenal. I thought it was pretty great but I understand how married people would like it more.

“Once Upon A Time In Hollywood”: This movie is less of your usual Quintin Tarantino bloodbath and more of a love letter to Hollywood and the time of the 60’s. The movie follows the friendship of fictional actor Rick Dalton, and his personal stunt man Cliff Booth, as both of their careers slowly die and they become the shadows of the men they used to be. This gives way to a very emotional performance by Leonardo DiCaprio that is also very funny. This excellent performance just makes me question even more why Margot Robbie’s character is in the movie. At first I thought that this film was going to surround her because I heard it was about the historic murder of her real life character, Sharon Tate, but she basically does nothing the entire movie. Tarrantino insisting on putting her bare feet in the movie because he has a foot fettish also rubbed me the wrong way. I don’t think this movie deserves to win best picture, or honestly, even be nominated. It’s more of just a fun kick for Tarantino fans. Not being one myself, I didn’t really enjoy this film that much.

“Ford V Ferrari”: Out of all the movies nominated for best picture, “Ford V Ferrari” is probably the most entertaining. It’s also the most out of place in the realm of the best picture category. Though the film boasts two Oscar winners as stars, it comes off more as just a fun racing blockbuster with no deeper themes. And it’s basically just that, but that’s not a bad thing. The film is a biopic about autodesigner Carol Shelby and race car driver Ken Miles as they persist to build a race car faster than Ferrari to win the legendary Le Mans race in France. They have to fight their way through their bosses, the laws of physics, and each other to make a race car faster than the usual champion. This is a very patriotic movie, what with the gritty, down home, all American Ford Motor Company going after the big fancy Italians against all odds. That being said, it never ventures into propaganda, which is always good. Honestly, I don’t really know why this movie was nominated, but it’s a good time.

“Little Women”: “Little Women” was probably the most boring movie nominated for best picture this year. It involves mainly a lot of wealthy white people going to parties or walking through nature talking. The main characters are relatively interesting and the story has nice themes, but it’s still the same story told over 150 years ago. As far as accomplishments in making a quality film, it lacks some key elements. All the performances in this movie are stellar, except for Emma Watson. There are times when her British accent comes out when she’s trying to do an American accent and it just makes me wonder why they didn’t hire an American actress for the role.

“The Irishman”: In recent years, director Martin Scorsese has gone off his own path, and made slightly more experimental movies. These include the psychological thriller “Shutter Island” and the movie about planes “The Aviator.” Scorsese used to exclusively do New York based gangster movies, and with this one, he’s gone back to his roots. He’s partnered up with long time friend Robert DeNiro and made a more “Goodfellas” or “Mean Streets” esque film. This film follows the life of bodyguard and Jack of all trades Frank Sheeran, as he tries to keep the Teamsters union running smoothly with minimal conflicts. But if you’ve seen a Scorsese movie, you know conflict is inevitable. There are countless murders and shoot outs in this movie, and it’s all fun to watch. Though this film is three and a half hours long, it never drags for a second.

“JoJo Rabbit”: JoJo Rabbit is certainly the funniest movie nominated for best picture this year, and it also has by far the most peculiar plot. The film follows a young boy in the Hitler Youth, who makes an imaginary friend out of Adolf Hitler himself. Though this may seem to be the heart of the story, the film explores the boy’s relationship with the Jewish girl living in his wall much more. The back and forth between these two characters, so fundamentally different, offers a profound and hilarious dialogue about humanity. Props to Scarlett Johasson for getting nominated for Best Supporting Actress for this, and Best Actress for “Marriage Story.”

“The Joker”: Where to start? This was easily the most controversial film nominated this year with the press coverage on it. But we’re not talking about that today. We’re talking about the quality of the film. Joaquin Phoenix is the Joker in this film. He’s on par with Heath Ledger, but I don’t think he’ll win best actor like him. That would mean the Oscars would be giving the best actor award to the same character twice. They did this with Robert De Niro and Marlon Brando as Don Vito Corleone, but Joker is certainly no Godfather. It’s honestly a little cheesy and on the nose at points, specifically the opening scene with the sign, and when Joker goes on TV. The film became a meme for a reason. There’s been so much said about this movie since its release I don’t think I can say anything new.

“1917”: Most war films acquire reasonable acclaim with the gimmick that they ‘make you feel like you’re in the action.’ However, this movie actually does make you feel like you’re in the action in a very skillful way. “1917” is filmed in a way that makes it look like it’s all one continuous shot. This makes you feel like you are just another soldier trying to deliver orders to call off an attack, like our main characters. You feel especially immersed when the men walk through the famous WWI trenches and the camera man goes in there as well displaying the soldiers’ view of the combat. Sometimes, with one shot films like this, it’s hard to really get attached to your characters because the camera can’t cut from one to another, so you can’t get up close and personal with their expressions. Maybe it’s just because this movie predominantly follows two characters, but you actually get a chance to explore what’s going on in the character’s heads.

“Parasite”: “Parasite” was probably the best movie nominated for best picture this year. The actors play their characters flawlessly, there are genuinely funny moments, and it all looks gorgeous. On top of this, it boasts an infinitely analyzable story about class and wealth. This film is about a poor family who coerces their way into tending a wealthy family’s house and children. Watching this poor family play the naive rich people like a fiddle is incredibly satisfying. This film is structured well and the pace makes sure you’re not bored once. You’re just on the edge of your seat with this family, wishing them the best.

If I were in charge of the Oscars, I would give the Best Picture award to “Parasite” because I feel like it’s the best movie. However, I don’t feel like the Oscars are progressive enough to give the award to a foreign film. Instead, I think they’ll give it to “The Irishman”, a whiter, more approachable film that the Oscars are used to. Also, most of its main actors are Oscar winners like Al Pacino, Robert DiNero, and Joe Pesci. The Oscars love giving awards to the same people. On top of that, this is the first movie Martin Scorsese has made like this in decades and is sure to sweep on Oscar night.