South choir is an outlier in the choral world, yet still has far to go with gender inclusivity 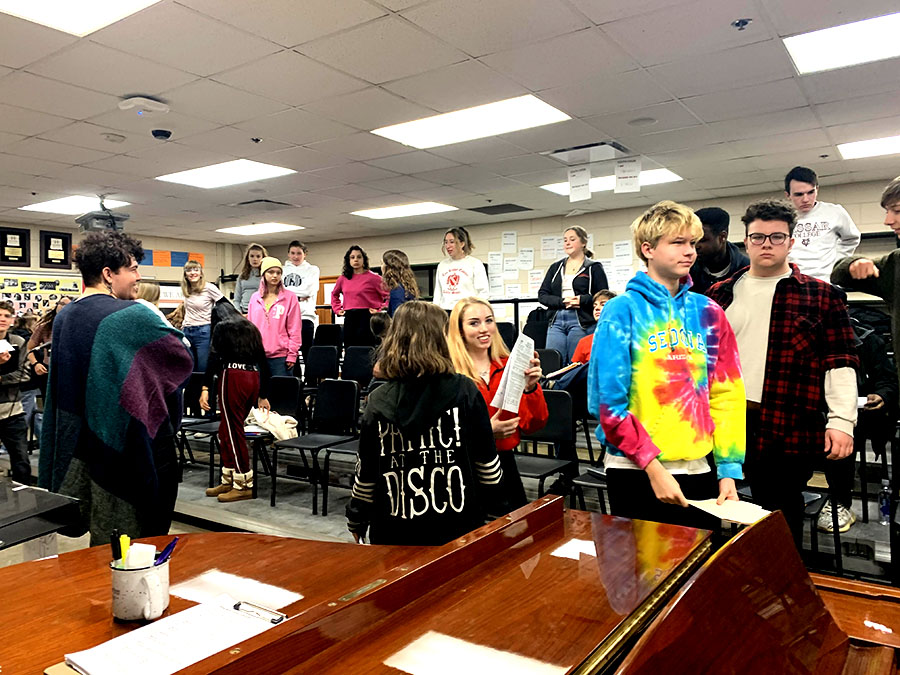 South is known for its accepting culture of trans and non binary students. The school has made big strides to be inclusive, including creating a gender neutral bathroom and adopting gender neutral language. The choir program at South is regarded as a safe space for students to express their concerns about gender equity in an effective manner. At South, it’s common for classes to hold circle discussions over issues in class or feelings students need to express. The choir program at South is no stranger to these discussions.

The experiences and struggles of trans and non binary students are a common theme in discussions held in choir. Senior Cor Barnhill reflected upon them, “I like [the discussions] because they force everyone around me to think about it for a little bit, a lot of my choir peers have the privilege of not thinking about it and I have to, I think about it every second period for an hour.” Although discussions can often be awkward and slow moving, they can be effective at creating awareness. Barnhill added, “I think that increased awareness is good even if it lasts only for fifty minutes.” However, junior Izzy Spiess feels differently about these discussions. “I don’t think our circles accomplish anything, they don’t bring marginalized voices forward because only CIS/HET students are comfortable speaking in the circles.”

When South attends concerts or events, Meyers works hard to ensure that her students are not misgendered. For example, South’s Varsity Choir attended the American Choral Directors Association annual conference and  Meyers worked hard to guarantee that South choir students would feel safe. She said, “When we went to the ACDA, I said that it was really important that all guests use gender neutral language, and they had two whole board meetings at the ACDA level about the terminology that adults use around students.

The process to becoming an inclusive space for trans and non binary students is not an easy process. While reflecting on how to make a safe choral space, Meyers said, “I feel like each year I’m learning how to do that by myself using the instrument name: soprano, alto, tenor, and bass as well as students, singers, that type of non gendered language. I also try to give a heads up to all of our guests to try to not assume the gender of any student they’re speaking with and to try to use gender neutral language, especially when asking questions to individual students. They’re doing their best, I try to remind them, I don’t want to be calling them out.”

Although South choir is considered an outlier in the choral world, some students feel that it is far from perfect. Spiess added, “It was very difficult coming into a new space that felt so established, and everybody knew each other which added an additional feeling of discomfort and made it feel like there was no space to talk about gender identity.” Choir can be intimidating for trans and non binary students. Spiess said, “I didn’t expect choir to be be great coming into it because singing is a physical thing, you don’t have a lot of control over how your voice sounds.”

Some choir students feel that South choir isn’t as forward thinking as its reputation. Trans and non binary students are underrepresented in the ensemble’s repertoire. Barnhill said, ¨We haven’t taken steps to actually lift the experiences of  gender non-conforming people, we haven’t sang any songs about the experiences of GNC [gender non-conforming] people nor any by GNC people.” In the past, South choir has sung songs from all over the world and in many different languages, but the experiences of trans and non binary people are not often sang about. Although, this problem is much deeper than South choir, it expands to the entirety of South and the entirety of the choral world. The experiences of trans and non binary people are underrepresented in the entire world, and this problem won’t be solved by solely using gender neutral language in classrooms. Barnhill said, “We’ve tried to stop letting gendered languages happen in the classroom, but we’ve kind of plateaued there.” This problem is very complex and there are many different sides to the story. Meyers added, “I know that students may not know that these composers are not all white, cisgender, heteronormative composers. I don’t identify people as LGBT right away because to me that seems like a very one dimensional way of labeling them. There’s so much I’m doing behind the scenes.”