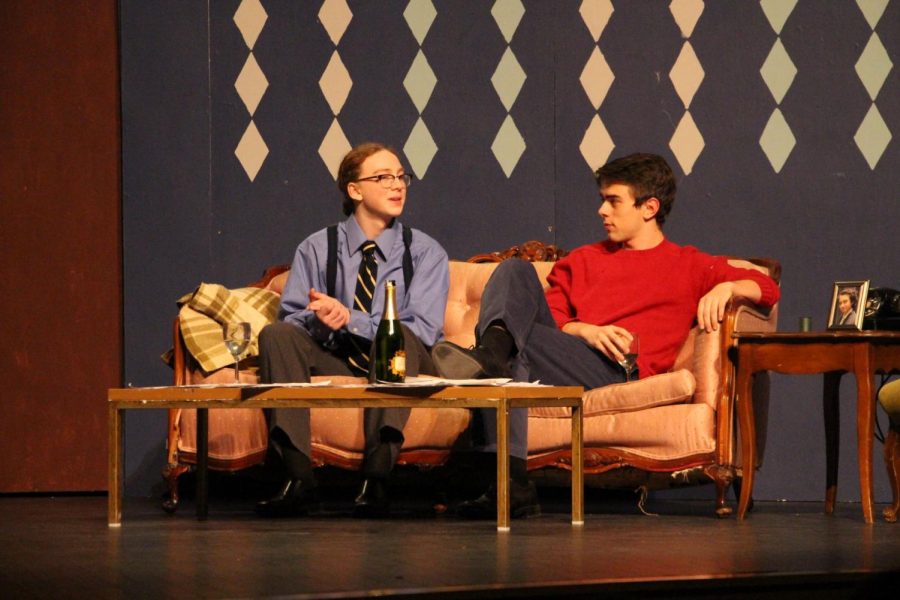 When Alan Turing chose to take a bite out of the cyanide-covered apple resting in his hand, every person on and off-stage held their breath. The lights blacked out; the performance was over. Although the atmosphere was heavy, people walked away from the show moved, with a new perspective on a story retold.

Last Thursday and Friday, South students brought the auditorium stage to life with Breaking the Code, a play directed by senior Cor Barnhill. Set in the 1920s-1954, the show follows the story of Alan Turing, a British mathematician and pioneer of computer science. Turing was one of the key players in breaking the German Enigma Code during WWII, but was persecuted for being gay.

Before the performance started, director Cor Barnhill addressed the audience about why he chose to take on the play. He juxtaposed the 2014 movie The Imitation Game, which brought Alan Turing’s story into the mainstream, with Breaking the Code, explaining that the latter was a more well-rounded depiction of Turing’s life and experiences.

Freshman Mia Lambert, who attended the show, appreciated the play. “I really liked how we could get to know Alan’s personality a lot better. I’ve watched The Imitation Game multiple times and I love that movie, but it was very focused on his life at Bleckley and not at all about him. It was mostly about his work. I liked getting to know more about his relationship with his mother and the other people around him-it was a much more humane look at his life.”

When the lights first come up, the audience sees Liam Campbell as Alan Turing conversing with Logan Waugh as Mick Ross, the local police officer. From their exchange, the audience learns that Turing has been robbed of money and other belongings, and from there stems the play’s storyline.

The characters are introduced one by one throughout the play, with each character assigned to a specific set and place on the stage and Turing traveling between all of them as they enter and exit. With Turing’s subtle costume changes in between each set, the transitions ran smoothly from one scene to the next.

Director Cor Barnhill explained, “The set was always going to have different areas for the differents part of Turing’s life. I didn’t realize I was going to be able to use the wings of the stage, so I originally had some places doubled up. In my original idea, the bar would just use the same table as the interrogation table which would have been weird and confusing…  I articulated the idea of watching Turing literally walk through the stages of his life in production meetings, and then the student set designers came to me with some drawings and I got to choose which one I liked best.”

As the play isn’t chronological, the plot moves backward to show viewers a younger, teenage Alan talking with his close friend Christopher. Later we find out that Christopher died young, and he became one of Turing’s inspirations to persist in his work.

Freshman Ezra Gearhart played the roles of Christopher and Nikos, a man Turing meets in Greece. “It was very fun to play my characters. I did research into the characters and I got to know them really well… The tech director of the theater program, Dave, his wife actually speaks Greek. She came in and she helped me which was really great, and she helped me be able to speak it much more realistically.”

As an adult, Turing gets romantically involved with a man he met at a bar, Ron Miller, played by Nathaniel Hasse. Ron has information about the man who robbed Turing, but doesn’t feel like he can tell the suspicious police about his and Turing’s relationship.

Eventually Turing tells police officer Mick Ross the truth about his romantic relationship with Ron, and Turing is charged with the crime of sexual indecency. This leads him to lose his job with the secret service as well as be forced to take medication as a form of conversion therapy. Eventually, the play comes to its end when Turing commits suicide via cyanide poisoning.

Mia Lambert voiced, “I think that halfway through the show everyone was starting to know what was happening, and everything was clicking, so I went through a whole roller coaster of emotions… after the show I was amazed at how well everyone did and how amazingly it all came together.”