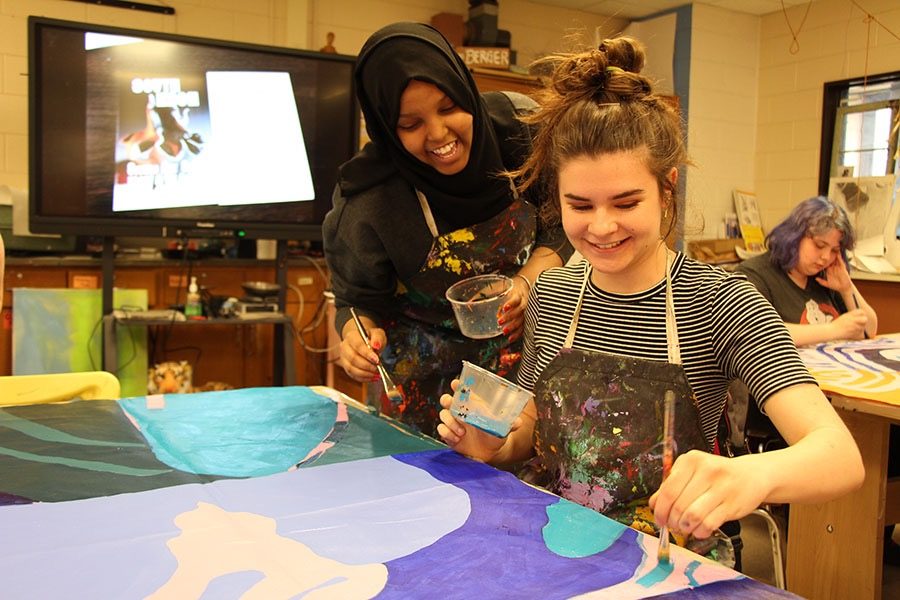 South High students Nasra Hassan and Frances Levy are just a few of the visual art students working together to paint the new mural for South. The mural that they are working on will be replacing the mural that is alongside the practice field by the end of June.

South High students Nasra Hassan and Francas Levy are just a few of the visual art students working together to paint a new outdoor mural for South. The mural will be replacing the one that’s alongside the practice field by the end of June.

This new mural project is a collaborative piece between afternoon visual art class students and teachers and GoodSpace Murals, whose artistic director, Greta McLain, is a 2001 South graduate. “We’ve been trying to get on the outside of the building for years,” said McLain. “It’s going to be a big landmark for the South community… because the building is kind of an eyesore, but we all love South so hard.”

Students from Cynthia Berger’s and Megan Knutson’s sculpture and painting classes are painting the majority of the mural. Meanwhile, Corbin Doty’s design theory class helped create the mural design. McLain, who has worked on multiple murals at South High, is responsible for helping guide all students through this creative process.

The project began by teaching students about the power of public art. They explored what this expression of art entails and looked at examples of other murals to gain inspiration. In order to brainstorm some ideas for the mural, students were asked: “Where do you see injustice?”, “What gives you hope?”, and “I know that I am free when…”.

Sophomore students Ana Tucker and Brianna Fernandez worked together to create some visuals based off of these questions. Tucker was pleasantly surprised about the freedom that was given to the students working on this project.  “Issues that I really care about can be put on a mural,” said Tucker.

The visuals Tucker and Fernandez created were intended to bring awareness to missing and murdered indigenous women. Fernandez explains that she hopes, “to show that the problem [of murdered and missing indigenous women] is there and needs to be spoken out [about], right now, [in] some sort of way.” After the brainstorming process, the visual art teachers and McLain pieced together as much of the artwork they could to create the final draft of the mural.

When the final draft was shown to the students, some were disappointed because the mural wasn’t what they had expected it to be. “I feel like not everyone’s design was in there,” said Ruwayda Abdisamed. “It’s just plain… I really thought our designs were going to be in it.”

Meanwhile other students were very happy with the results of the final draft. Sophomore Isabel Burciaga said her favorite part of the mural was the “activism part.” “I completely love…the pride flag – I am bisexual, so it makes me feel a little bit more welcome here,” said Burciaga.

The revisions were due to two reasons: timeliness and location. “A lot of the students have done work that represents current movements, and I think the conflict of interest with that is we’re hoping to have this [mural] last for the next twenty-five years. So some of those movements or issues may not be relevant later on,” Knutson said.

Knutson further explained that, “[People from the district] wanted…more overall representation of South on the outside since we do have some more controversial work that’s going to be happening inside the building. So as far as the outside goes, they wanted to keep it more positive and inclusive and sort of general.” Despite some of the frustrations from the students, “I do really feel that the experience of creating this themselves is going to be more rewarding in the long run,” said Knutson.

For the past few weeks, students have begun painting the mural inside the commons of South High. This outside mural is able to be painted inside by using the “the parachute cloth technique.”  Parachute cloth is essentially large sheets of canvas that act much like a sticker. Students are able to paint onto the canvas, and when the time comes, that canvas can be placed directly on the wall.

The teachers are also using a grid technique to divide up this approximately 2,250 square foot wall. A grid technique is typically used to enlarge an image. First a grid was drawn over the draft of the mural. Then the grid was scaled to equal the ratio of the wall. Each grid piece was then cut out of the parachute cloth and given to students to paint that specific part of the mural.

“[Working on the mural] feels great because we can just get it all done and just see how it all comes together…. [I’m most excited about] putting it up on the wall [and knowing that] I left part of me at South,” said Burciaga.