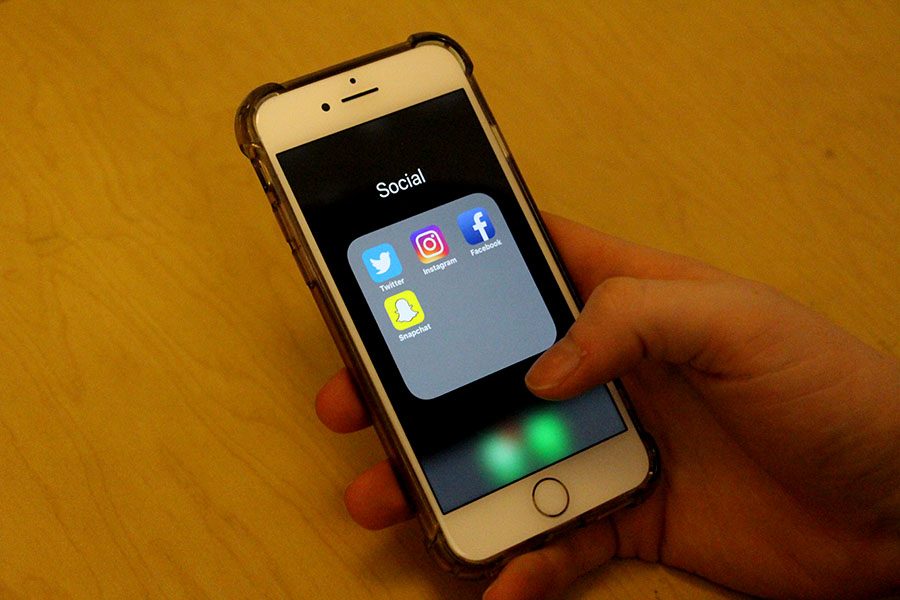 Snapchat, Instagram, and Facebook are the three most popular social media sites among today’s teens. “Most people have mains and finstas, and on mains, people try to portray themselves differently, but on spams, people are honest, and post trashy pictures of themselves or long paragraphs about they feel,” says Kaiya Woller.

It always feels good to get a new follower on instagram, right? Not all of us are that interested in instagram followers, not all of us even use social media, but most of us can admit that having a social media presence that people pay attention to, feels nice. We get to share important moments of our life, things we feel proud about, our accomplishments–in a way, we get to brag about ourselves. Generally, the more people we get to brag to, the better. There are some people at south even who have gained some measure of fame on different social media sites, and who wouldn’t want to be popular on social media? But maintaining a presence on instagram or facebook means opening yourself up criticism.

Even at places full of young people like at South, there are still those who would rather not have a presence on social media.

“I wouldn’t want to be on social media anyways because it’s really toxic” begins junior Adelaide Ravensburg. “Social media is there to glorify beauty and take away from substance…It used to be a way of communicating and sharing cool things but now its like a platform to ridicule others. That’s definitely why people use social media; to promote themselves.”

Most agree that, on social media, people tend to portray an overly positive version of themselves. This is not to say that nothing personal and less-than-perfect makes its way onto it though. As senior Kiaya Woller says, “Most people have mains and finstas, and on mains, people try to portray themselves differently, but on spams, people are honest, and post trashy pictures of themselves or long paragraphs about they feel.” For those who don’t use instagram, finsta , or spam, means fake insta, accounts usually only shown to the owners close circle.

Many would be quick to point out a variety of reasons why social media is a positive thing. Woller talks about why she uses social media. “I uses social media to keep track of what’s happening with my friends. I like that I can keep track of people who I don’t see often, people from my past who I haven’t talked to in awhile. I also get to encourage people, like whenever I see a friend post something, I can say “it looks cute!” or something.” For many, social media can be a tool for encouraging people, and being encouraged.

Many people consider social media to provide them with a social outlet they wouldn’t have otherwise. Oftentimes, high schoolers social lives are hindered by a lack of free time and feeling shy in a large environment. Access to things such as snapchat and skype allows people to communicate without being in the same space, which can help shy people connect, and also makes communicating much easier between people.

Skye Hauser doesn’t use social media that much himself, but he can guess as to what the effects on people are. “You’ll likely have a lot more to talk about with other people, such as the public news or things that are happening. You’ll also be slightly more outgoing in my opinion, because you can be.” Skye also talks about how social media can facilitate interactions, saying “It’s a way to talk to people without making plans, without setting up days that they can talk to each other, so you can just pull out your phone, go to twitter, go to myspace, go to facebook. It helps them set up plans to meet.”

Skye later clarified that he knew Myspace was long dead.

Although she felt she portrays a pretty honest version of herself on social media, she did say that, for the most part, there is way more to a person than what you can see browsing through facebook. “You’re not gonna see every side of a person based on their social media, so I feel like it can be a negative thing especially if you’re using those really good sides of people, and comparing those to yourself…When I start comparing myself to people too much, because there’s ‘’oh that person is really pretty”, then there’s “oh that person is prettier than me, I wish I looked like that”, when it gets to that point I know I need to take a step back.”

The idea of negative comparison surfaces a lot in conversations about social media. Scrolling through sites like instagram, you will see photos of people looking their best.
Seeing a perfect image of everyone around you can promote a negative perception of oneself, which is, of course, bad. So always make sure to moderate yourself, and don’t go nuts over likes on facebook.