The ‘Clue’ performance was a play to die for 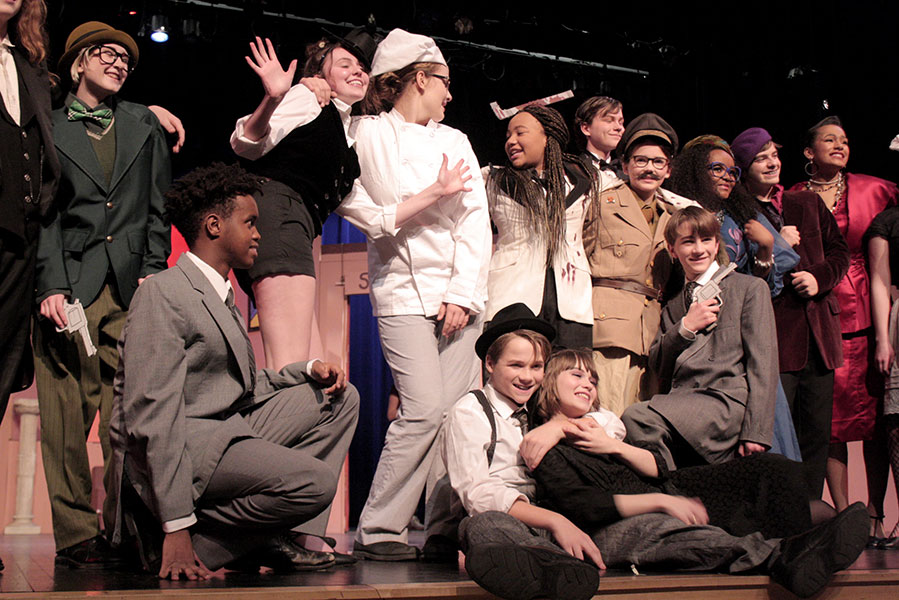 The cast of Clue smiling on stage after the last performance on December 7th. “It was one of the best South plays I’ve seen,” said junior Gretta Opstad, an audience member on the Friday showing.

It’s a dark and stormy night at the Boddy Manor residency. Five ushers (Abdulhakim Abdullahi, Liam Campbell, Will Cornell, Evan Kennedy, and Mya Lynch) set up the stage in an orderly fashion, sweeping, moving furniture, and in turn, inviting us to a night of bloody murder. Well, six murders to be exact.

The play Clue directed by Taous Khazem and presented by the South High Theater; was performed on December 6th and 7th on South High’s main stage. The performance was adapted from both the Paramount Motion Picture and the Hasbro board game ‘CLUE’.

After the ominous yet charming introduction from the five ushers we are then introduced to the main usher, Wadsworth, played by Aidan Campbell. “It was a challenge because I had to speak in an accent that kind of changed regions of the world throughout the play unintentionally,” said Campbell jokingly. “It was a lot of fun, [but] it was hard.”

Wadsworth speaks directly to the audience making it seem as though you are no longer sitting in your seat, but instead within the castle walls of the Boddy Manor residency itself. Lightning strikes, followed by the sound of rain.

Suddenly the doorbell rings and the rest of the starring cast is introduced. Each of the characters step into the house one by one dressed in their own distinguished color to fit each of their animated characters. Colonel Mustard (Clara Conry) abruptly storms through the door in a general’s outfit and a large mustache. Soon follows is Ms. White (Izzy Spiess) walking in wearing a black veil and a black dress much like the one you could expect to see at a funeral. “I actually did not like [Ms. White] at first. I really wanted to be the French maid but then [Ms. White] grew on me and I had a lot of fun,” said Spiess.

After an intense few moments with Spiess as Ms. White, in comes Ms. Scarlett (Anya Naylor) who elegantly steps in wearing a tight red dress and finely pinned hair, topped off with a cigarette holder. After Ms. Scarlet is introduced as a force to be reckoned with; Mr. Green (Iris Eichinger) stumbles through the door sneezing and hunched over a cane, insisting that, “there must be a cat around here somewhere.”

With a smirk plastered on his face in strolls, Mr. Plum (Sasha Rapacz) with his head held high in a classy purple suit and beret. Finally, Mrs. Peacock (Soliyana Woldu) frantically enters the home in a frilly blue dress with a fur shoulder crest and peacock feathers sticking out the back.

“We really wanted to make each character very individual and stand out,” said Haakon Anderson, who was one of the costume designers for the show. The designers paid close attention to the use of color. The designers brought the game to life “by very meticulously making every game pieces’ costume as much [of] the same color as we could, and making the ensemble and supporting cast [wear] black and white… So you had that stark contrast between characters,” said Anderson.

After all of the characters have gathered in the hall of the Boddy Manor residency, we quickly find out that each character has a secret of their own to hide. The characters are blackmailed into paying the mysterious Mr. Boddy or else all their secrets shall be revealed. Suddenly the lights go out. Once the lights flicker back on; one character is found lying dead. And the mystery begins.

Now although the subject matter seems intense, Clue’s quick wit and irony make this more of a comedy than anything else. The fast pacing of the jokes and the over-the-top chaos in every scene makes almost certain that you will miss a joke or two, but that’s where the fun in multiple viewings comes in. Its loaded with the kind of humor that either flies right by you or can make you giggle for the rest of the night.

“That’s not very democratic of you!” declares Ms. Scarlet, when the frantic group is desperately trying to make a decision. “I’m a Republican,” retorts Mustard almost immediately.

The script and looks weren’t the only things this play had to offer. Clue also did multiple intriguing staging and performance techniques. The use of body doubles throughout the play made it appear as though one character is in two places at once. The performance also depicted going back in time to review all that had happened throughout the show. These techniques were difficult for some people to follow. “I am very confused,” said sophomore Galen McKenna. “It moved so fast I had a hard time of understanding what was truly happening.”

The night continued in a smorgasbord of shrieking, near constant murder, and decapitated heads played earnestly by the young and talented cast. Throughout this chaotic and thoroughly enjoyable performance, the audience can be heard laughing, yelling words of encouragement, and engaging more with the cast than we’ve seen in a long time.

“I’d recommend it,” said sophomore Andrew Anderson. “It was worth my time, it was funny because you know the kids.”

“I thought it was very well presented overall. My favorite thing was definitely the set. It went way above my expectation of a high school performance,” said sophomore Joshua Lee-Reid. “This is definitely one of the best sets I have ever seen.”

“I really enjoyed how it stuck with the movie. I’ve seen a lot of shows that are based on movies and they are nowhere near the same. So I liked how it was very similar,” said junior Gretta Opstad. “It was one of the best South plays I’ve seen.”