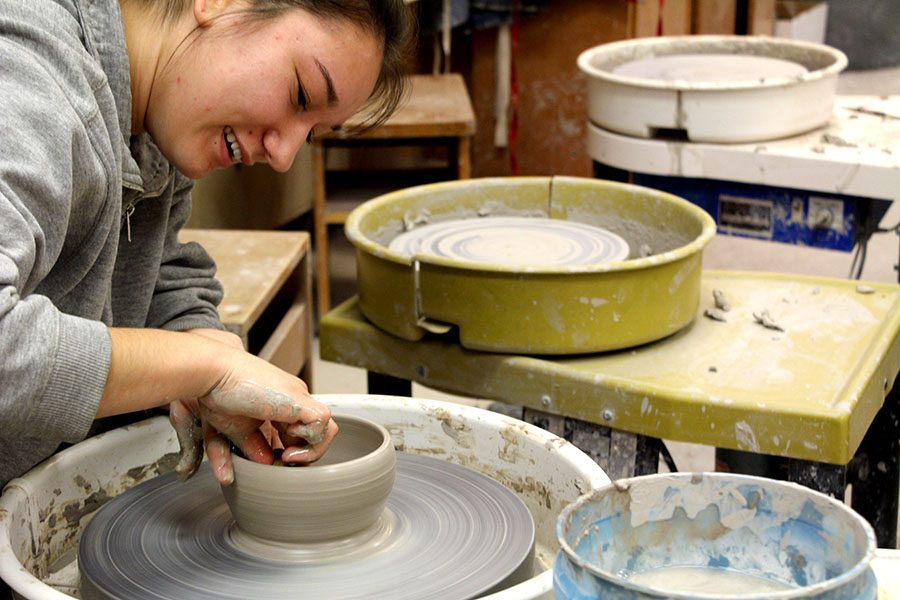 Successful careers in the arts are often judged to be unrealistic, but with South’s incredible arts program, many students plan on pursuing an arts career, specifically in ceramics.

Senior Elizabeth Webster is dreaming of  being a ceramics teacher. Webster, who has been doing ceramics for four years, said “people see it as more of a hobby than a career path, so it’s hard, but once they see how much I love it and [see] what I can do with it, they get more on board.” Webster says this about her experience with family and friends when she talks about her hopes for the future.

South’s arts programs are particularly strong, but South is the only school in the Minneapolis Public School District with an all-day ceramics program. South’s ceramics teacher, David Olson said “South has the best opportunities for anybody and everybody to try out ceramics or to take ceramics for 3 years in a row.” Olson added “I know all the High School art teachers in the district, some of them are really good with clay, so there’s opportunities for those students to do ceramics, but because it’s not offered all day long, it’s much more challenging for students to get the ceramics class they want to fit in their schedule.”

It seems that students are aware of this. Senior Sophia Rapacz added “[from] what I’ve heard from a lot of people, this is the best ceramics studio as far as the Minneapolis Public Schools go.”

South’s ceramics studio and passionate teacher helps art inclined students thrive and enhance their abilities beyond the opportunities other schools have. “Having such an amazing studio at south along with an amazing teacher/mentor David Olson has taught me so much and helped me pursue my dream.” said Oliver Elias in a text message, a Freshman at Kansas City Art Institute and a graduate of South.

“[South has] given me the opportunities and the chances to work with clay and really see how much I love it and seeing Mr. Olson teach other kids and experiencing like what it would be like really is eye opening,” said Webster on learning from Olson. “It’s like a second home, I spend so much time there,” Webster later added.

“We have all the materials and equipment that you’d find in a college level studio and I encourage students who are really interested in ceramics to find a way to be here as much as they can,” said Olson. South also give opportunities for students to display their art every year, such as the Viva City Art Show, a Summer showcase at Augsburg and a gallery show at Modus Locus in the Spring. “If you stay with ceramics you could potentially have three different exhibits on your exhibition record which is one thing colleges are looking for, any type of scholarship, or gallery representation,” continued Olson.

Ceramics means a lot to people who are involved in it, it can often be much more than just a type of art. Rapacz, who has been doing ceramics for three years said the ceramics studio is “the part of South that really feels like home to me.” Webster added that ceramics isn’t “just an art form to me, it’s kind of [a way of] expressing yourself.”

Ceramics is particularly hard to succeed in, due to all of the essential equipment needed for the production of clay works. “Ceramics is a little bit different than other [arts]… For ceramics, it takes more space because you need a studio, you can’t just have a desk, a drawing table, or a notepad and then the cost of the materials and firing,” said Olson, “you have to have all the specialized equipment.”

This sets ceramics apart from other visual art forms. Another different aspect of ceramics is the ability to use the pottery that one makes. Rapacz said “I like being able to make things that don’t just sit around the house… you know it’s going to be used.”

South students have various different things that they want to get out of a career in ceramics. “Becoming an independent artist along with creating a space like the Northern Clay Center which is in Minneapolis, that holds studios, classes a gallery and most importantly builds a community and safe space for people to explore the art of ceramics would be a dream of mine,” said Elias.

Webster has already decided her plans for after high school.“[I plan] to go to a community college, get my generals and stuff done and then go on to major in art and become a high school ceramics teacher.”

Rapacz would like to sell her pottery as an additional income in order to continue pursuing ceramics. “[I plan] Go to a small liberal arts college where I can explore some more traditionally academic stuff while still keeping up with my art,” said Rapacz.

Ceramics isn’t exactly a generic career path, so many people are surprised when they see others pursuing it. Olson said “If you have parents who don’t know what it means to be an artist, they might have a hard time.”

“They’re kinda hesitant at first,” said Webster on her family and friends approval of her career choice. “Obviously because it’s really hard to start out and really get going and a lot of people see it as more of a hobby than a career path.”

Although Rapacz’s family is supportive, they are concerned about her career as a ceramic artist.  “They’ll support me whatever I try to do but I think if I were to do only ceramics they would worry about me being able to take care of myself because art is a hard industry to stay in.”