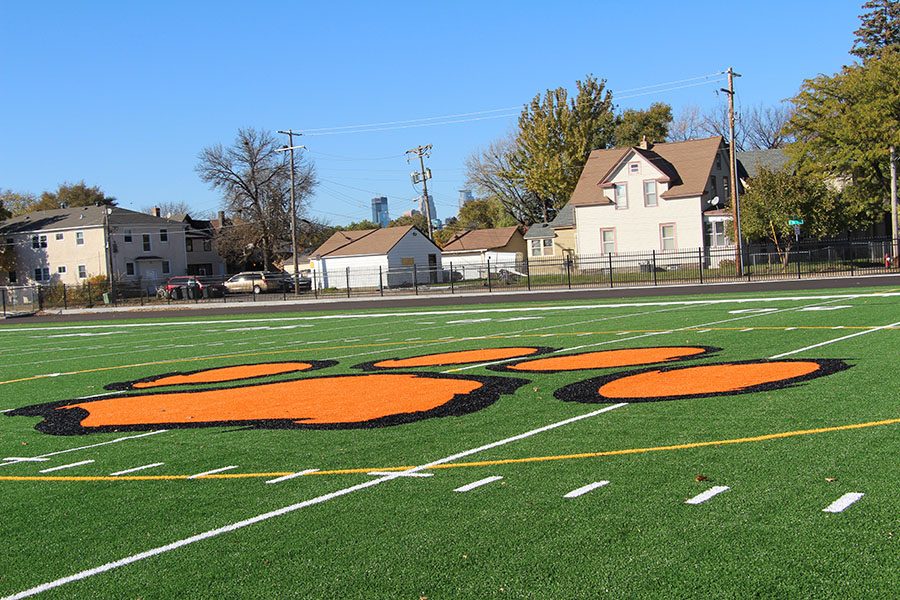 This is a picture of the logo which students designed in their Civil Engineering Class at South. The logo is supposed to represent a tiger paw, and is located in the center of the new field. This design was chosen over others for its simplicity and connection to South’s sports teams, the tigers. Photo: Patrick Bruch

South’s new field has been under construction, as many people who have been around lately have noticed. The new field is a significant upgrade from the old one, with new synthetic turf. Something else students may have noticed is the new design in the middle of the field, which is a huge tiger paw. This design was actually done by South students in their Civil Engineering and Architecture class, and the story of how this specific design came to be is very interesting.

Claire Bentfield was one of the students who designed it in a collaborative effort with her classmates. She helped to design it in the engineering class taught by Mr. Sirovy. In Civil Engineering students learn about building structures in our society, like football fields. When asked how the idea for the project came about, Mr. Sirovy had this to say; “It kind of was something we didn’t really plan, then the [South] Foundation came to us, to the class, and wanted to know if we could get it done within that time period…  so the two classes kind of split everything up and everyone had their own section to work on.”

Although the design turned out well, it was not an easy or simple road to finalizing the design. They went through a few other designs, described by Bentfield. “We originally wanted to do the tiger that’s in the middle of the gym, but it ended up being too many colors and too complicated to put on the field.” Next, they tried to do the South logo of the shield with the tiger face, but according to Bentfield, “It also ended up being too complicated.”

The final design they decided on was the design that is currently on the field, which is a huge orange tiger paw print in the center of the field. Bentfield said they chose this design “Because it just seemed simple enough and it was just one color and it was not as extensive as the other ones were going to be.” Mr. Sirovy, explained how the design was finally chosen and approved “We did have Mr. Aponte and the South High Foundation take a look at it, and they liked it.”

Although Bentfield was one of the students that worked on the field project, the other students in the class worked on other parts of the field and its design. South senior Ben Tennant had this to say about the project as a whole “Involving students in the project was really cool, it made me feel like I have a voice even if it was just designing a field.”