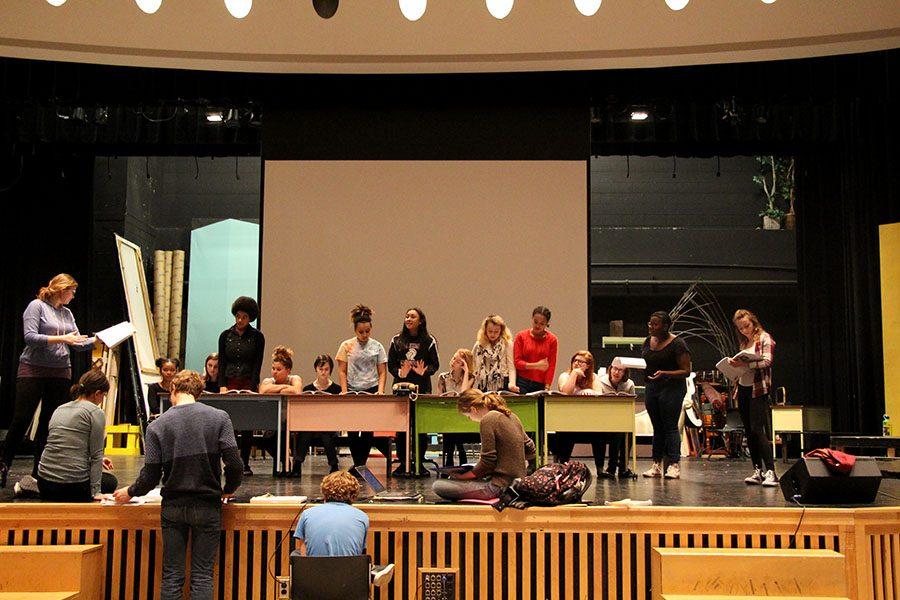 Many people have sought community within South. For many, theater as provided one. Doing theater often ends in a bond between the people involved.

South’s vibrant theater community has been a place of refuge for many. A supportive community that can be relied on when the stresses of high school put you in a state of anxiety. When the pressures of being a young adult leave you with a feeling of unease.

While it might just seem like a bunch of flamboyant theater kids who enjoy attention and sometimes obnoxious public conduct, the culture and community go beyond just showing off.

Thor Paulson, a 12th-grade stage manager (and sometimes director), says theater has helped to save him from the stresses he feels when making friends. “I had some trouble making friends when I first got into high school. A lot of my friends were a year younger than I was, so freshman year I didn’t really do too much socially. When I started theater I kinda opened myself up to a lot more people.”

In his first show, he assistant directed a one act. The antisocial sophomore experienced the diverse crowd of South High Theater.

“I think it’s one of the most diverse crowds at South, especially for extracurriculars, ” he told me, “everyone is typically very artistically and consciously minded.”

Paulson believes the reason the theater community is so welcoming is to do to the aspect of like-minded people participating together to create one piece of art.

“I feel like when you’re in a play, everyone is working towards a common goal. Working with a script you get a certain amount of understanding with other people, compared to just doing separate activities. Everyone is looking at the same thing and trying to get the same understanding out of it.”

Senior Aaron Vanek, an actor who often is recognized as the face of South High theater sought belonging. Theater is the place where he feels important, where he can rely on his peers.

“I feel like the people in theater are more accepting of the type of person I am. I’m pretty rambunctious, and to a lot of people outside might think that’s really weird,” he said.

“The theater community is definitely very supportive. I think a lot of that comes from the reason we’re all there… We want to make a show. And the show is only as good as the weakest link,” he told me “Auditions are different, but during a show, everyone needs to be supportive and help each other out; because they’re all gonna be going up on stage. And regardless of if they did well individually if the show doesn’t turn out well, it reflects badly on everyone involved.”

It has been a place where no matter how many people outside in the real world may dislike me or hate me, in theater I know there will always be at least one person who will be there to support me.

The process of creating a show turns the people in the past you just viewed as peers, into the people you can call your friends.