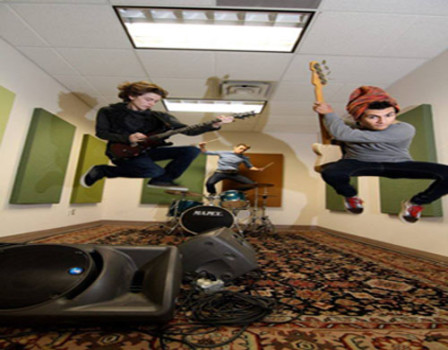 Although not on a tour, senior Eli Kapell and his band “Color Tab” traveled to Wisconsin and Illinois for 3 days to play some shows in Rockford and Madison.

The band met while attending The City of Lakes Waldorf School. Color Tab’s Facebook page says Alex, the guitarist, and Kieren, the bassist, formed the band “as a school project in 8th grade”. However in May, their drummer left and Eli approached the two guys, asking to audition. He played his first show ever with them at The Fine Line in downtown Minneapolis on May 5. Kieren currently attends the U of M, while Alex is taking a year off before attending Mcnally Smith College of Music next year.

Traveling with Kieren’s dad, Kapell, Alex and Kieren headed to Madison and Rockford where they spent three days. The three slept on a friend’s couch, and played at two venues; the ELB on June 14 and the Frequency on the 16th.

When asked about the most memorable moment, Kapell recalled when his chair broke mid-set : “During the show at the frequency my drum stool broke in half during the middle of our set and I had to keep my body perfectly still and move nothing but my arms otherwise I would’ve fallen off the stool. After a few songs like this the manager at the venue gave me an extra stool to use.”

That wasn’t the only unexpected thing to happen to Kapell this trip. One venue decided that their set list was too short, so during the ride there, Kapell learned the beat to an old Color Tab song.

Their music, which they describe as “pop with 1950’s influences” is written by Kieren and Alex.

Kapell states that he will always want to be in a band, if not Color Tab. As for the future of the band, they are going to work on building their reputation and following. They also hope to find some shows in other states.