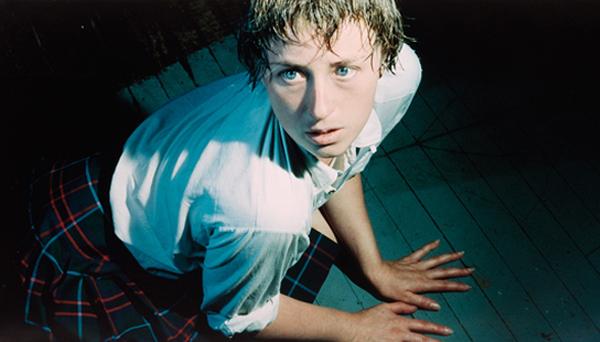 Cindy Sherman is an artist, an actress, and a critic, whose inspiring work is being showcased at the Walker Art Museum through February. I left her exhibit at the Walker feeling enlightened and empowered. Through various disguises she effectively persuades you that she is who she wants to be.

When she is in front of a camera, Sherman is the person she portrays, and each portrait has a different personality and effectively evokes different emotions. Her photographs show a critique of the role and representation of women, a wide range of emotions, and what power looks like. By turning the camera on herself she has broken the wall between the photographer and the photographed; this creates a very enticing and intimate picture.

Sherman was born in 1954, in Glen Ridge, New Jersey. The youngest of five children, her mother was a reading teacher and her father an engineer, and growing up she wasn’t that involved in the arts.

She began to explore her artistic side when she went to college. She began with the medium of paint but soon got bored with it.  In her artist bio she said that ” . . .there was nothing more to say [through painting]. I was meticulously copying other art and then I realized I could just use a camera and put my time into an idea instead.” Sherman started exploring with photography for the rest of her time in college.

After graduation she moved to New York, where she started a series that would become some of her most well-known work: “Untitled Film Stills.”   Although she is in almost all the pictures as the model or subject, her photos are not self-portraits. This first series is a critique of the role and representation of women in media and in society.  She critiques this by showing what is expected of women, and  in her later pictures she adds humor. Sherman got her influence through looking at B-list actresses and viewing the representation of women in the media. She goes from seductive temptress to party animal to housewife in this series of seventy stills.

In each of these pictures Sherman takes on a  unique persona. In Untitled Film Still #10, she is an underappreciated housewife who got home from the grocery store only to have her bag rip open all over her kitchen floor. She is glaring at some unknown subject as if they did this to her, maybe they knocked the bag out of her hands. Either way it provides for a powerful photo and image of the life of a housewife.

In the next photo, Untitled Film Still #6,  Sherman appears almost doll-like. One hand by her face, another holding a brush, and her eyes not fixed in any direction as if she was chasing air bubbles around her head, this woman has a completely different personality than Untitled Film Still #10. This woman is vain, pampered, and seductive.

Sherman effectively persuades the viewer that she is someone else completely in the next photo, Untitled Film Still #7. Leaning drunkenly, exposing her stockings, she is a tramp. She probably is stumbling out of a hotel room not expecting to find daylight, but by the hat of the woman outside and her casual manner, people are going about their everyday business, not paying her any mind. Holding her glass and sunglasses she is exposed.

This series kick-started Sherman’s career. Making these powerful statements about women and exposing these stereotypes was met with a major positive response.

Sherman then conquered the centerfold fashion photograph. She collected inspirations from fairy tales to create her next work.

Untitled #92 is in Sherman’s series of centerfolds; in this series, she explores emotionally charged situations. There is no dispute of the fear you can see in her eyes. Her clothes  and position make her seem docile and young, as if she was just thrown to the floor. Her hair is wet, which adds to the fear; you could assume that it is wet with sweat, as if she had been running away from some unknown monster, not to be defeated. This is frightening in many ways, and one of the scariest things is that you can’t see her attacker, you don’t know where she is, and you don’t know if she is going to be helped. Sherman goes from heart-broken, to bored, to frightened in this well-put-together centerfold series.

Untitled # 465 is a portrait that shows the face of power. The gaudy earrings and the multiple pearls, matched with a supercilious stare, create a perfect image of wealth. The background emphasizes this image with impressive stairs that you can imagine leading up to an even more impressive house. This woman represents not only wealth and power, but also the falsity of beauty. This falsity is shown though what people expect her to be and how she reacts to these expectations. This picture in the Walker exhibit is huge, emphasizing the power and gaudiness of this woman.

Sherman’s exhibit at the Walker features over 160 of her photographs, and chronicles her development from the 70’s to the present. The exhibit has been open since November and runs through February 17.